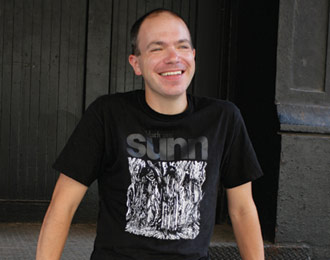 Sasha Frere-Jones, The New Yorker‘s prolific pop-music critic, is about to get busier. Last week, the news broke that he had signed on as the new culture editor of The Daily, News Corporation’s soon-to-debut iPad newspaper. For now, Frere-Jones, a musician in his own right and current member of the bands Piñata and Calvinist, continues to write—on race in American pop music and the end of hip-hop, among other volatile subjects—and to document his surroundings in photos he calls “barely photography.” We caught up with Frere-Jones to quiz him about his current music faves and the perks of being one of the world’s Top 30 critics.

Sasha Frere-Jones: Robyn’s Body Talk Part 1 and Body Talk Part 2, two of three albums she has promised to release in 2010. At the Polar Music Prize ceremonies in Stockholm, I heard Robyn sing Björk’s “Hyperballad” and something felt right in the world, as if the good guys had won something significant. When pop as smart and exuberant and well-rendered as Robyn’s comes into the world, the idea of the underground seems less logical. If you can be Robyn, why would you need to escape the mainstream? (Both albums double as aerobic sessions, conveniently.)

MJ: Shuffle your iPod (or equivalent) and name the first 5 songs that pop up.

MJ: What’s the latest song that super-glued itself in your brain?

SFJ: Everything is political, or nothing is.

MJ: Name the biggest perk of being pop-music critic for The New Yorker.

SFJ: I am paid to write and people read what I write.