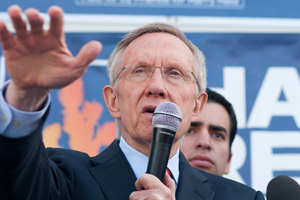 A dozen or more. Every day, even weekends. The emails from the Harry Reid campaign and the Nevada Democratic Party just kept pouring in throughout Reid’s vicious battle with conservative Sharron Angle, with subject lines like “Alright, Sharron Angle Can’t Possibly Top This One…” and “It’s Official: Sharron Angle Will Say or Do Anything to Get Elected” and “How Sharron Angle’s Record Proves She’d Be a Miserable Failure in the US Senate.” The missives ripped Reid’s tea party opponent for her hypocrisy, her refusal to take questions from the media, and her bizarre statements. And it looks like they worked, but only barely.

Harry Reid, the flinty-eyed majority leader of the Senate, triumphed over Angle by the slimmest of margins in one of the most closely watched races of the 2010 midterms. The loss marks a major blow for the tea party, which had pumped tens of millions of dollars and countless time into Angle’s campaign. Her fight against Reid was also one of the dirtiest of the 2010 elections, with both campaigns cutting harsh attack ads aimed at landing the knockout punch to secure victory. The Reid-Angle race was one of the most expensive of this election cycle: The two candidates combined to spend $42 million on their campaigns, according to the Center for Responsive Politics.

But, in the end, it was likely Sharron Angle’s highlight reel of gaffes and shockers that sealed her defeat. Here’s the Cliffs Notes version of Angle’s myriad campaign flubs:

“It really comes from the statehouse to incentivize that kind of stuff in our state,” Angle said. “Truly, the lieutenant governor, Brian Krolicki, you should have this conversation with him. That’s his job, to make sure that we get business into this state. My job is to create the climate so that everybody wants to come.”

The woman gave her a puzzled look. “I’m sure you’re probably planning on working with these people to do these things,” Drenta said, hopefully. “Because it’s the end result that matters, whether it’s specifically in the job description or not.”

In Angle’s case, there was no amount of tea party enthusiasm, small-donor support, and political strategy that could convince Nevadans to elect her to the Senate.