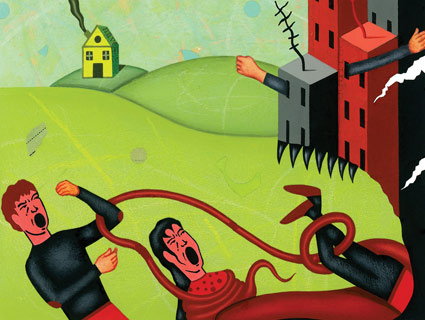 First, they took on the political establishment in Congress. Now, tea partiers have trained their sights on a new and insidious target: local planning and zoning commissions, which activists believe are carrying out a global conspiracy to trample American liberties and force citizens into Orwellian “human habitation zones.”

At the root of this plot is the admittedly sinister-sounding Agenda 21, an 18-year-old UN plan to encourage countries to consider the environmental impacts of human development. Tea partiers see Agenda 21 behind everything from a septic tank inspection law in Florida to a plan in Maine to reduce traffic on Route 1. The issue even flared up briefly during the midterms, when Colorado Republican gubernatorial candidate Dan Maes accused his Democratic opponent of using a bike-sharing program to convert Denver into a “United Nations Community.”

Agenda 21 paranoia has swept the tea party scene, driving activists around the country to delve into the minutiae of local governance. And now that the midterm elections are over, they’re descending on planning meetings and transit debates, wielding PowerPoints about Agenda 21, and generally freaking out low-level bureaucrats with accusations about their roles in a supposed international conspiracy.

Virginia activist Donna Holt is among those who believe that Agenda 21—unveiled during the UN’s “Earth Summit” in 1992—is really a plot to curtail private property rights and deprive Americans of precious constitutional freedoms. In reality, the document will do nothing of the sort, but it has nevertheless been the target of conspiracy-minded UN haters for years. Holt and other tea partiers are taking their cues from people like Henry Lamb, a WorldNetDaily columnist and founder of Sovereignty International and Freedom21, groups designed to fight Agenda 21 and its ilk. He has been arguing for decades that the UN is secretly plotting to herd humans into crowded cities so that the rest of the world can be devoted to wildlife preservation. (Lamb declined to comment for this story because back Mother Jones once included him in a story called Wingnuts in Sheep’s Clothing, and another article that described his role in Astroturf lobbying against the Kyoto treaty.)

Holt has also has relied on the research of Tom DeWeese, the founder of the American Policy Center and a climate change denier whose group has been funded by Exxon. DeWeese’s organization hosted a conference in Valley Forge, Pennsylvania, this summer attended by many tea partiers, which featured sessions on Agenda 21. Schooled by such activists, Holt, the Virginia coordinator of Ron Paul’s Campaign for Liberty, has set to work spreading the word about Agenda 21 and the evils of sustainable development. She’s finding a very receptive audience among tea party groups, who she believes are going to make sustainable development the next target of their activism.

“I’m overwhelmed with tea party leaders who have asked me to come and speak to their groups,” she says. “They’re calling on me to form a coalition, to put up a dedicated website.” She says tea partiers understand that “there is a global agenda to actually abolish private property and abolish the Constitution for that matter.” If sustainable development is fully implemented, she says, “This basically will turn us into a Soviet state.”

In the tea partiers’ dystopian vision, the increased density favored by planners to allow for better mass transit become compulsory “human habitation zones.” They warn of Americans being forcibly moved from their suburban dream homes into urban “hobbit homes” and required to give up their cars and instead—gasp!—take the bus to work. The enemies in this fight are hidden behind bland trade-association names like the American Planning Association or ICLEI (Local Governments for Sustainability).

Shortly after the midterm elections, a Maine tea party group blasted out a call to arms to its members: “Red Alert! Agenda 21 is coming on full force to the Mid coast area!” The notice implored members to show up at a November 10 meeting in Rockland sponsored by the Maine Department of Transportation. The group warned that the agency was:

implementing the sustainable development/Agenda 21. This is the hard core agenda 21 derived from…the United Nations, and we need to make a BIG presence to show our outrage and anger at this. This is the centralized planning for the de-industrialization of large segments of Maine, and the relocation and isolation of the population into human habitation zones. Plan on attending the meeting and express your outrage at this. We need to stop this NOW before it gets out of hand.

What UN-inspired outrage was on the table for the meeting? A proposal to improve development and reduce traffic around Route 1, which runs up the eastern coast of the state. Stacy Benjamin, the DOT project manager, says that four or five people she and her colleagues have never seen before showed up at the meeting. During the public comment session, the activists questioned the DOT representatives about Agenda 21. “None of us had ever heard of it,” Benjamin says, laughing, “but we learned a lot about Agenda 21. They had handouts.” The tea partiers also posed questions about “human habitation zones,” she says, noting that they were polite and interested in what the committee members had to say.

The scene in Maine is repeating itself across the country. Only sometimes the activists are less polite. One planning consultant I spoke with, who requested anonymity, recalled a recent meeting where he was on the receiving end of tea party rage. “I got called a communist,” he says. Someone in another tea party-heavy area recently told him, “We don’t need none of that smart growth communism.” The people he’s been encountering are new to the process, short on solid facts, and many are “spitting mad.” Combined with what they see as an “elitist” bent in planning consultants, he says, it makes for a toxic and intimidating mix for local officials who aren’t used to being accosted by conspiracy theory wielding activists.

The local planning fights reveal a little-understood characteristic of the tea party movement: its inherently suburban nature. Not only does the movement’s agenda derive from a hostility to what it sees as elites, but it’s also hostile to the places those elites live—namely, cities and more densely populated areas—which makes sustainable development a natural issue for activists. Call them the newest pro-sprawl lobby.

In Virginia, Holt is trying to whip up tea party opposition to a comprehensive development plan being drafted in Chesterfield County, where she lives near Richmond. She believes such plans will, among other things, ban cul de sacs, and she happens to live on one. So far, though, she hasn’t made much progress with the county. “They don’t want to hear from us,” she says. “They think we are wackos with tinfoil hats.”

Indeed, while the UN conspiracy talk makes it easy to dismiss the tea partiers as nutters, that doesn’t mean they won’t derail local development projects. Take what transpired recently in Tampa, Florida, where tea party activists helped defeat a widely supported measure that would have funded light rail and road improvements in Hillsborough County. In the lead-up to a ballot initiative on the penny-per-dollar sales tax increase to fund the project, the local conservative paper, the Tampa Bay Examiner, ran a series on Agenda 21 plus commentary suggesting that the “smart growth” principles underlying the light rail proposal were simply “cover for an agenda to transfer American sovereignty to various tentacles of the United Nations.”

And the Florida tea partiers are just getting started. The Tampa 912 project, which often works in tandem with tea party groups, organized members over the summer to attend project briefings on another transportation plan for high-speed rail in the state. After a July meeting, the group’s chairman reported back on the powwow with great skepticism. She said supporters claimed that:

the high speed rail project will conserve 1 million acres of environmental lands and cause 44% less land to be consumed. How does a train running down the middle of I-4 do all that? The answer is by “compact development” aka “smart growth”, aka “New Urbanism”, aka “Traditional Neighborhood Design”, aka “Transit Oriented Development”, aka “Livable Communities”, aka “Sustainable Development.” These are all names meaning the same thing: they are anti-suburban, high-density dwelling design concepts that are part of the UN’s Agenda 21 and will make single family home ownership for our posterity unattainable.

In Florida, the tea partiers have had some help in such fights from Ed Braddy, the executive director of the American Dream Coalition, which opposes smart growth and other standard components of modern land-use planning. Braddy, who has dubbed cars “personal mobility machines,” has become a popular speaker on the tea party circuit. A former Gainesville city commissioner, he believes the rail fight in Florida, along with the involvement of the tea partiers on sustainable development issues, is the wave of the future.

“The tea party is receptive to our argument,” he says. Regardless of whether people believe that Agenda 21 is a UN plot (he doesn’t), tea partiers recognize the evils of sustainable development. “It’s almost an instinctive thing,” he says. “People know that living in a suburban development and driving to work is not an inherently bad thing. Living in a tiny cramped apartment surrounded by noises, so you can hop a bus is not intrinsically superior. “

When the tea partiers bring that perspective to local government, they have the potential to make a significant impact—far more than they might have on, say, a congressional health care bill where high-paid lobbyists dominate. It’s clear that they are starting to realize that, too.

A condensed version of this article appeared in the March/April 2011 Issue of Mother Jones magazine.