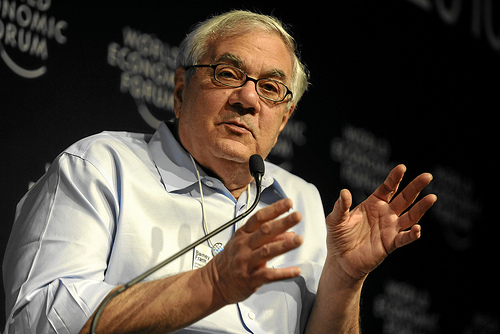 The House Democratic Caucus has rejected President Obama’s bargain to retain the Bush-era tax cuts, voting nearly unanimously during a caucus Thursday meeting to oppose bringing the deal to the House floor. The resolution was a symbolic move intended to demonstrate that House Democrats had the numbers to stop the deal from moving forward, demanding changes to Obama’s bargain with the Republicans. But a leading liberal Democrat, Rep. Barney Frank (D-Mass.), told Mother Jones that the president’s tax-cut deal would pass anyway, and that the bill based on Obama’s bargain would have enough votes to pass the House—despite vehement Democratic opposition.

“I still think it’s going to go through—why do you think it isn’t?” Frank said in a Thursday interview outside the caucus meeting. “I always knew a majority of Democrats would be against it. I still think they have the votes for it, yeah.” He added that House Democrats simply lacked the ability to have a major impact on the legislation: “I think the notion that the caucus controls legislation is not a good one.”

Frank emphasized that he still opposed the tax-cut bargain but nevertheless thought a vote should be held on the tax package as it currently stands. Speaker Nancy Pelosi will have to decide herself whether to bring any bill to a vote on the House floor, saying Thursday that she stood by the caucus’ resolution and would not proceed unless the framework was changed. House Democrats at the caucus meeting said they would specifically demand changes to the watered-down estate tax in the bargain—a cornerstone of Republican support for the bill.

If Pelosi made such revisions, however, it could derail the entire bargain and prolong the battle indefinitely, potentially running up against the Dec. 31 deadline when the current tax-cuts expire. Rep. Lynn Woolsey, a co-chair of the House Progressive Caucus, asserted Thursday that Democrats were willing to run that risk.* But Frank remains convinced that the Democratic caucus will be unable to hold up the negotiations, predicting that Pelosi will ultimately be forced to bring the president’s tax deal forward: “I think she will have to, yeah.”

Much has been made of the rift between the president and liberal Democrats over the tax deal. While he agreed that the discord was a “disagreement over a very important issue,” the Massachusetts Democrat brushed aside concerns about a looming civil war on the left. “I think this is a pretty unique set of circumstances,” Frank said, noting the pending expiration of the tax cuts on Dec. 31. “We will be together most of the time, and there will be occasional times when we’re different.”

*Update: Story has been updated to reflect Pelosi’s latest remarks.