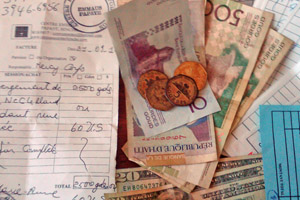 Some Mother Jones end-of-the-year fundraising copy came across my desk yesterday (you’ll probably see it in the box to the right), and the part that points out that our content is “expensive for us to produce” has inspired me to share the numbers from my very long assignment reporting on the BP oil spill. So what did it cost to keep me covering the Gulf all summer long?

There were plane tickets, car rentals, cabs to and from airports. Meals and snacks and enough water to combat a heat index of 105°. A place to sleep for 120 nights. Four months worth of paychecks plus benefits like health care. Then add in all sorts of random extras like steel-toe boots so I could walk around on the relief well, laminated nautical maps for kayaking around the Louisiana barrier islands, gas to drive to Pensacola, and the pricey door charge of female-oil-wrestling events.

But this was a trip of great resourcefulness and thrift. I persuaded people I knew in New Orleans, as well as Grand Isle-based Twitter followers, to let me stay at their houses. I bribed these people. Generally it was with bottles of nice booze. Often it also involved going to the grocery store, plus cooking meals and/or doing the dishes; sometimes it was a matter of watching some kids, driving the kids to school, giving the whole house a hardcore Midwesterner’s scrub-down. As a result, 16 weeks of lodging—one of the biggest pieces of the reporting-budget pie—cost Mother Jones about $2,000. I also cut my exorbitant car rental charges in half when I ingratiated myself with someone who was going out of town and lent me his pickup truck for a month, then worked a combination of public transit, occasional cabs, and borrowed rides for another month.

So in the end, the bill for my reporting extravaganza was deeply discounted, but it was still far from cheap: about $30,000. And that doesn’t include institutional overhead, or web costs, or all the hours my brilliant editor had to spend untangling my sentences and reminding me via email that I swear too much. Nor does it include the wages and expenses of the rest of the (award-winning) Mother Jones oil-spill-reporting team, with Kate Sheppard busting ass in DC and Julia Whitty briefly joining me down South and editors blogging and webmasters staging and so on.

And then I went straight from the Gulf to Haiti, which is like the most expensive place in the world.

There’s your partial breakdown from just one-half of a year from my little corner of the magazine. It’s what our editors in chief call The Price of Truth. “Sure, information wants to be free,” they wrote in an ed note last year. “Alas, it’s not.”

(You can contribute to Mother Jones via credit card or PayPal. Just btw.)