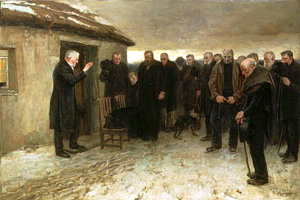 In the sleek downtown offices of the Bipartisan Policy Center, the casualties of the midterm elections wave unloaded: Defeated lawmakers at the panel discussion included two Republicans who had been primaried out of office—Sen. Bob Bennett and Rep. Mike Castle—along with Rep. Chet Edwards (R-Texas) and Rep. Earl Pomeroy (D-ND), conservative Democrats who lost their seats to the GOP. All were pilloried for reaching across the aisle and for supporting Democratic priorities. “The people have spoken…the bastards,” declared the event’s host, former Clinton cabinet member Dan Glickman, quoting famed Congressman Mo Udall—a five-time presidential contender who never made it past his party’s primary.

Between the laugh lines, the vanquished oscillated between anger about the past and gloom for the future—along with a good dose of self-righteousness that they fought the good fight. Though they sat before a backdrop covered with the Bipartisan Policy Center’s red-and-blue logos, few were particularly sunny about the next Congress’ ability to work across the aisle.

Asked whether Obama’s bipartisan tax deal—which passed the House and Senate by an overwhelming margin—might be a model for future dealmaking, Castle didn’t mince words. “The answer to that is no… I don’t have a lot of hope for a lot of real bipartisanship.” For Pomeroy—who sponsored an amendment to strengthen the estate tax that failed to pass—the deal was an even more depressing reminder of how hard it would be. “Both parties have just left off the tough part of their responsibilities—’Let’s all go home and hail this bipartisan outburst at the end of the session and raise the deficit by $1 trillion,'” he said with some bitterness. “It doesn’t bode well.”

“The answer is no. I don’t have a lot of hope for a lot of real bipartisanship,” said Rep. Mike Castle.

The soon-to-be former lawmakers directed their anger at a host of targets: gerrymandering (Edwards was a victim of Tom DeLay’s redistricting scheme), spending by outside interest groups, and a loss of civility in Congress. But they reserved a special kind of blame for the media. “Advertisers should stop advertising on programs where all they do is scream at each other,” said Edwards. “You have to stop demeaning people’s integrity simply because you disagree with them; stop questioning their patriotism.” Castle went after the media for turning his own race against Christine O’Donnell in a “very ideologically driven” contest—and for spreading misinformation about major programs like the Troubled Asset Relief Program. “This is a program that is actually working, and it was left to the pseudo-press—bloggers—to rip it apart,” Castle added. (The Delaware Republican also gave a shout-out to No Labels, the rather skeptically received group for politically homeless centrists, which launched this week.)

But as a point of pride, they pointed to the votes that had cost them dearly. A conservative Republican whose primary defeat came as a shock to the establishment, Bennett pointed to TARP—a catalyst for the right-wing backlash against him—as a crowning achievement. “That was one of Congress’ finest moments,” he said, recalling a remark that the impending financial apocalypse “was like a James Bond movie.” Edwards beamed with pride about his own decision to support the bailout. “It was one of the most important votes I cast in my 20 years in politics,” said the Texas Democrat, recalling President Bush’s plea for his support.

“Everyone said, you’ve got to vote this conservative way, and I said, I’m sorry I can’t. That got thrown in my teeth. Everywhere I went was Cass Sunstein—’How could you vote to put [in office] a Communist, pedophile,” Sen. Bob Bennett recalled.

Bennett admitted that he hewed to the conservative line by default at times “when there was a vote that was relatively meaningless, and I didn’t feel strongly one way or the other”—confessing that he might have voted differently had he examined the issue more closely. But his voice rose as he explained his decision to buck the party during the confirmation of Cass Sunstein to the White House’s Office of Regulatory Affairs. “Everyone said, you’ve got to vote this conservative way, and I said, I’m sorry I can’t; I listen to you often enough… That got thrown in my teeth. Everywhere I went was Cass Sunstein—’How could you vote to put [in office] a Communist, pedophile,’ whatever else they called him,” Bennett recalled.

Even the most direct victims of 2010’s conservative revolt were hopeful that the triumphant freshmen would be forced to moderate themselves once they arrived in office. “These are good people, elected for strong ideological reasons. But when they get here they have to run things—they have to run a government,” said Castle, who acknowledged that holding a hard line on issues like the debt limit and earmarks might not be politically feasible.

But victims of the tea party wave also admonished more-moderate legislators that they would have to walk a tightrope. Castle—considered one of the most liberal members of the House—warned that legislators shouldn’t underestimate the way their votes could be held against them: “Be very careful about positions you take. We need to work together to make things work in the country, but on the other hand you want to be cautious.”

At the same time, Bennett noted, running to the right could backfire as well. “Do not try to be all things to all people,” the Utah Republican said. If I “start sounding like Jim DeMint, people on the far right won’t believe me: ‘You’re insincere—you’re pandering to us, so our opinion of you goes down even more.'”