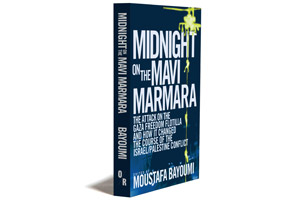 After months of back and forth accusations between the Israeli government and survivors of May’s deadly flotilla raid, Gaza flotilla passengers and their supporters have come together to make their case in print. This collection of 48 essays from activists, journalists, and prominent scholars exudes outrage, solidarity, and gritty hopefulness.

“The floors were like a slaughterhouse,” recalls Turkish journalist Sumeyye Ertekin. “I saw people whose internal organs were out….Gas and sound bombs were thrown. There were so many shots aimed at the ship, I started to think that they were aiming to sink the boat.”

Some of the passengers report seeing bodies of civilians shot multiple times at point-blank range, but none describe the specific incidents in which these individuals were killed. Many dispute Israeli government allegations that passengers wielded kitchen knives as weapons. Others emphasize that passengers chose not to fire guns seized from Israeli soldiers and provided injured soldiers with protection and medical assistance—claims supported by photographs and video footage.

The subsequent four sections of the book contain passionate, fact-filled editorials on diverse topics, such as: the humanitarian impact of Israel’s three-year blockade on Gaza, lessons from South Africa’s anti-apartheid activists, and the potential impact of boycott, divestment, and sanctions campaigns against Israel.

Some readers may feel aghast at the book’s scant discussion of suicide bombing and rocket attacks suffered by Israelis. In a handful of sentences, book editor Moustafa Bayoumi denounces anti-Semitism and concedes that Hamas and Hezbollah are “accordingly and correctly ostracized by much of the international community” for targeting civilians. Yet he—and all of the authors—devote far more attention to condemning Israel’s “extraordinary impunity” in its allegedly unintentional and wildly disproportionate killing of Palestinian civilians.

Many of the book’s contributors contend that the flotilla tragedy marked a Selma-reminiscent turning point in the history of the Israeli-Palestinian conflict. If activists seize this momentum, they argue, Israeli “apartheid” and “collective punishment” can be thwarted.

Book contributor and Free Gaza Movement co-founder Paul Larudee, a 64-year-old who jumped into the Mediterranean Sea as Israeli commandos boarded his ship, echoed this forward-looking tone at a book promotion event this week in San Francisco. He also plugged an upcoming flotilla mission that he anticipates will include at least a dozen boats.

“We’re planning to have a sizable contingent [of International Solidarity Movement activists] aboard the next flotilla,” he said. “I don’t want to be the only one to jump in the water. We want to have some serious non-violent resistance.”