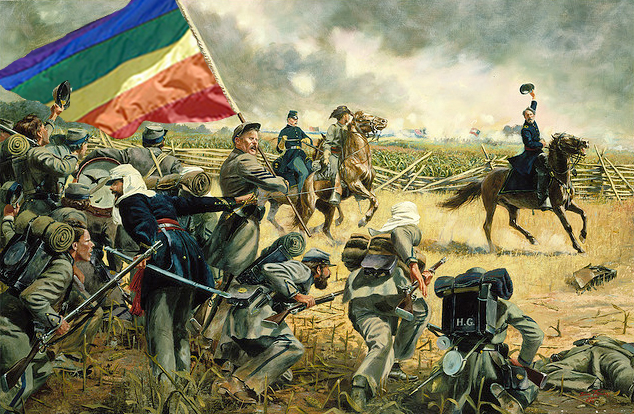 [UPDATE: While Va. Delegate Bob Marshall didn’t return calls from Mother Jones, he unloaded on gays Tuesday morning on a DC news show. Check out his comments (and the state governor’s reaction) here.]

They’ve done it with civil rights. They’re doing it with health care reform. Some even hope to do it with every federal law. But now, one conservative is asserting his state’s rights to beat back equality for gays in the armed forces.

Just two days after the Senate voted to allow gays to serve openly in the US military, Virginia statehouse delegate Bob Marshall is crafting a bill that would take a big chunk out of the federal government’s expected repeal of Don’t Ask, Don’t Tell. Marshall proposes a full ban of gays in the Virginia National Guard, insisting that the Constitution gives individual states power over “the appointment of the officers, and the authority of training the militia.”

“The Constitution never would have been ratified if states were not reserved unqualified control of the militia, now called the National Guard,” Marshall told the Washington Post. Marshall, by the way, represents a swath of Northern Virginia that includes Manassas—a town that, 149 years ago, saw its “Army of Northern Virginia” openly assert itself against the US Army in the First Battle of Bull Run.

He insists that his bill is strategic, but in fact, it’s laced with states’ rights reasoning: “After 232 years of prohibiting active, open homosexuals from enlisting in our military, President Obama and a majority in Congress are conducting a social experiment with our troops and our national security,” he says.

It’s not the first time Marshall’s railed against federal power. He’s decried “Obamacare” as “a power grab by the Obama Administration and Congress to extend their insidious reach further into our private lives” and sympathizes with activists who favor a “Repeal Amendment”—a constitutional amendment that would give states the right to disobey any federal laws they find objectionable.

At the same time, Marshall’s libertarian, individual rights-based talk doesn’t square with some of his own positions: He’s best known in the state as an ardent opponent of abortion and gay rights. He sponsored a successful 2006 amendment to the state’s constitution that banned gay marriage. And in the late ’80s, he was the research director of the American Life League, arguing that all birth control should be illegal. In 1989, when asked by a Boston Globe reporter whether abortion should be permitted in cases of incest, he replied, “What if incest is voluntary?…Sometimes it is.”

In that same report, Marshall made an argument against birth control that would seem to undercut the case he now makes about gays in the military. “In Florida, retirees are working at McDonald’s because there’s not enough kids to do it,” he told the reporter, decrying the US’s plummeting birthrate. “Military and economic security are severely jeopardized by the serious population drop in this country.”

If a low birth rate threatens our military readiness, then why further hamstring recruiters by making gays and lesbians off-limits to them? In fact, Marshall says, an all-straight Virginia militia would have a huge value added in US conflicts. “In countries where religions and cultures find homosexual acts immoral, the Obama administration’s repeal policy will work to the detriment of all American troops in securing local cooperation with our nation’s foreign policy goals,” he told the Post. Translation: If Marshall has his way, then Virginia guardsmen could be headed to Iraq and Afghanistan again…and again…and again…and again. Thanks for your sacrifice, fellas!

In any case, even if Marshall’s proposal can pass muster with Virginia’s legislative and executive branches, it’s bloody unlikely to pass either the judiciary’s or the military’s standards. Cotton Puryear, the communications director for Virginia’s Department of Military Affairs, declined to offer any comment on Marshall’s proposal or the expected DADT repeal, saying that all offices were awaiting final guidance from the Department of Defense. But he did stress that “a Virginia Guard soldier has to meet the same standards…as a federal active-duty soldier.” Once the state’s recruiters select their candidates, they’re processed for the service on a national level, going through the military’s regional recruiting stations—known as Military Enlistment Processing Centers—side by side with applicants for other services. Once approved, “More than likely, they will go to the federal active-duty specialty training courses,” Puryear said. That includes boot camp, “advanced individual training,” and follow-on job courses. In essence, Virginia Guard soldiers and airmen will serve alongside federal troops throughout their careers—including gays and lesbians, once DADT repeal becomes law.

Marshall, the Virginia bill’s architect, did not return a message left on his cell phone Monday. But it’s unclear how committed he is to the gay ban. On his website’s issues page, he lists “2nd Amendment,” “Abusive Driver Fees,” “Dulles Toll Road,” “Illegal Immigration,” and “Power Lines” among his top concerns, but doesn’t mention military or veterans’ affairs. And while he proudly boasts of receiving an “NRA 50-ft. Sharpshooter Award,” he has no record of military service in any capacity. But perhaps his extensive readings give him the confidence to legislate defense affairs: After all, according to his biography, “He has a personal library of 2000+ books.”