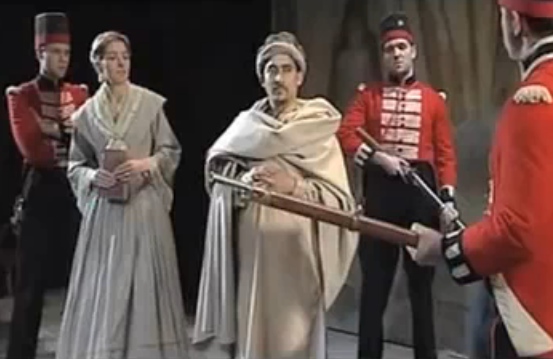 Richard Holbrooke, President Obama’s special envoy to Afghanistan and Pakistan, was a man who understood the complexities of the region’s religions, economy, and geopolitics. His reported last words have gone viral since his death: “You’ve got to stop this war in Afghanistan.” They’re sobering words from a man who traversed deep into the history and culture of a country that was once part of the Persian Empire—a region that contributed science, poetry, and Zoroastrianism to the world, but now fights for survival. What few Westerners realize is just how long superpowers have been meddling in Afghanistan’s affairs. Fortunately, two British directors set out to fill that memory gap.

Nicholas Kent and Indhu Rubhasingham of England’s Tricycle Theatre realized a few years ago that despite the growing body count in Afghanistan, governments, media, and most artists had remained focused on Iraq. The gap in coverage, they discovered, matched the gap in the general public’s understanding of Afghan history.

So Kent and Rubhasingham hunted down the UK’s best political playwrights and commissioned them to create a play that, though often lacking in theatrical depth, makes up for it in pedagogical breadth. The Great Game is a three-part piece composed of 12 skits, using only 14 British actors. It tells the story of the Russian-British-American involvement in Afghanistan between 1842 and today. The play’s title is from a phrase popularized by Rudyard Kipling’s book Kim, referring to the initial struggle between Russia and England for control over South and Central Asia.

Prior to the opening act, I was flipping through Berkeley Repertory Theatre’s magazine, which was distributed at the door. It was jammed with the Afghanistan timelines and maps—a thinner version of a high-school textbook. As I reviewed the list of characters for Part One, a loud POP made me jump, and three turbaned “Taliban” men ran in from the back of the theatre. They were coming to punish Mohammed Mashal, an Afghan village painter depicting his national pride on the stage’s back wall. His mural, which presented the cultural heroes of the past, was used as the visual thread connecting the three parts of the play fashioned by different playwrights.

Kent and Rubhasingham commissioned the writers to create plays from various parts of Afghan history, allowing them complete freedom in political tone, though sometimes coercing them to adopt a specific time period. Due to the variety in writers’ perspectives, as a unified account the play was about as complex as South and Central Asia’s perennial geopolitics. The country that was once forced “to chose between the embrace of the Bear and the claw of the Lion”—as a 19th century amir told British Foreign Minister Henry Mortimer Durand during the play’s second part—still faces the same challenge, with only the players of the game changing hands.

The Chief of Britain’s Ministry of Defense, Gen. Sir Richard Davids, ordered soldiers en route to Afghanistan to watch the play before departing, believing “nothing learnt in the classroom [would] have the same subliminal effect as this” (PDF). Prior to the play, this piqued my interest: Surely England wouldn’t promote a play that presented its entire sordid imperial history before the jury of a modern audience? But the composition produced far more questions than curt answers, stimulating conversation among playgoers in the hall between parts. “To me, the power of something like this,” Rubhasingham told guests over dinner, “is having 12 different voices. There’s not one line of political thinking. And I hope by the end of the trilogy people will see that it’s a complex issue.”

This was especially true in the third part of the play. It began with the stage’s back-wall mural—which had since been whitewashed by Part Two’s Muslim radicals—morphing into a large screen. A video clip flickered on the wall, showing the iconic image of the burning twin towers. The wall then lowered backwards, with the towers still burning. In its place, two large panels unfolded—changing the background from a wall of culture into a field of poppies, setting the stage for the modern events.

Though the script certainly didn’t grant immunity to Afghanistan’s invaders, it also didn’t dwell solely on typical questions of whether or not the West should be there. Rather, it confronted the ground reality and the modern-day characters that deal with it: the humanitarian stuck between difficult compromises; the fearful father of a schoolgirl; and a furloughed US soldier who can’t even look at his own son because he’s too busy thinking of Afghan children. Rubhasingham said that these scenes display the theatre’s power to grow awareness: “That’s where I think information can get communicated really clearly. Because if you feel something, you connect with it more. You want to know more about it.”

And even if you’re not at New York University’s Skirball Center for the Performing Arts for this weekend’s performance, you can watch video clips via The Guardian, or read the published script in full.