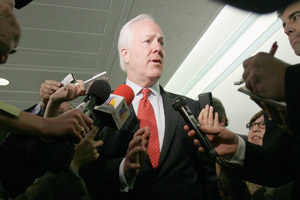 On Wednesday afternoon, as House and Senate Democrats were trying to handle the end-of-session passage of an $1.1 trillion omnibus spending bill to fund the federal government, Sen. John Cornyn (R-Tex.) sent out a blistering email fundraiser for the National Republican Senatorial Committee, which he heads. In the note, Cornyn decried the 6,600 earmarks totaling $8 billion contained in the bill:

Will you help send a message to Senate Democrats? Go here and tell them that you will not stand for business as usual in Washington. They should not pass this bill and to stop spending money our country doesn’t have.

Cornyn failed to mention that last year he numbered among Congress’ top earmarkers—supporting dozens of earmark requests that added up to $228 million.

As for the current bill, Cornyn has had a tough time explaining his own contradictory actions. On Fox News, host Bill Hemmer hammered Cornyn for requesting $16 million worth of earmarks in the very bill he was denouncing Democrats for. “Can you defend that?” Hemmer presseed. Cornyn said that he supported the Senate GOP’s two-year moratorium on earmarks and would vote against this spending bill. But with the Democrats in the majority, the bill could well pass without Cornyn’s vote. Under that circumstance, he would be able to both claim credit for the earmarks and for voting against the Democratic bill.

At a Capitol Hill press conference on Tuesday, Cornyn ran into similar trouble. After both he and Sen. John Thune (R-SD) slammed the bill, reporters grilled them on why the measure contained earmarks they’d requested. “I support those projects, but I don’t support this bill,” Thune said. When one reporter said to Cornyn, “It appears like you’re saying one thing and doing another,” the senator replied, “Not at all.” As a GOP staffer tried to end the press conference, another reporter asked Cornyn if he would acknowledge “that it was wrong to put the earmarks in in the first place.” Cornyn responded, “You’ve asked the question about five times and I’ve tried to answer it to the best of my ability.” Then Cornyn left the room.

So one of the primo earmarkers on the Hill won’t say whether he should have shoved earmarks into the current (or previous) spending bill. But he shows no hesitation in blasting Democrats for passing a measure containing his earmarks. In that NRSC email, he exclaims, “Democrats have a lot of explaining to do to taxpayers.” So, too, does Cornyn.