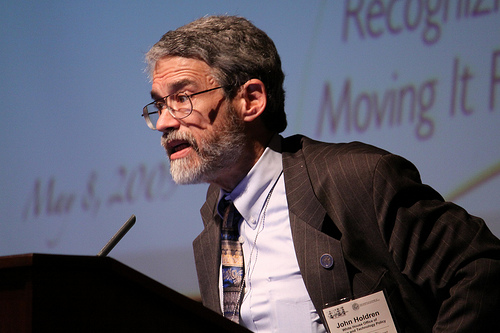 Photo by The National Academy of Sciences, via Flickr.

The Obama administration on Friday finally released that scientific integrity plan it was supposed to produce almost a year and a half ago.

President Obama called on John Holdren, his chief science adviser, to “develop a strategy for restoring scientific integrity to government decision making” and ensure that the new administration makes decisions based on “the soundest science” in one of his first executive orders. Holdren announced on the White House blog that he’s issued a memorandum describing the “minimum standards” expected for departments and agencies as they write their own scientific integrity rules. So it’s not exactly the plan—more of a framework. But I guess that’s something.

Holdren wrote that the new standards call for a “clear prohibition on political interference in scientific processes and expanded assurances of transparency.” Each department and agency is expected to report on its progress on that front in four months.

While watchdog groups are glad to finally see the directive, they’re somewhat nervous that implementation appears to be left up to individual agencies. Francesca Grifo, senior scientist and director of the UCS Scientific Integrity Program, called it a “rough but promising blueprint for honesty and accountability in the use of science in government decisions.” “If the details are fully articulated by federal agencies and departments, the directive will help keep politics in its place and allow government scientists to do their jobs, said Grifo in a statement. “At the same time, I’m worried that the directive leaves an enormous amount of discretion to the agencies.”