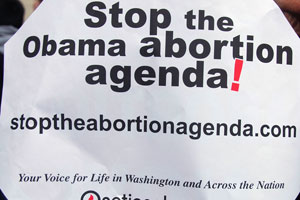 A protester holds a sign at an anti-abortion rally in San Francisco. | Flickr/<a href="http://www.flickr.com/photos/ari/3229869266/sizes/l/in/photostream/">Steve Rhodes</a> (<a href="http://www.creativecommons.org">Creative Commons</a>).

If you thought the abortion battle during the health care debate was fierce, just wait until Republicans take over the House in January. Strengthened by congressional victories in the midterm elections, Republican abortion foes plan to push hard in the new year. Their top goals: enshrine tough restrictions on abortion funding into federal law and defund Planned Parenthood. And they’ll have Democratic help to do it.

The tip of the spear when it comes to GOP efforts advance anti-abortion legislatin is the the No Taxpayer Funding for Abortion Act (HR 5939), which was introduced by Rep. Chris Smith (R-N.J.) and already has 185 cosponsors. The bill’s goals were highlighted in the GOP’s “Pledge to America,” and future Speaker of the House Rep. John Boehner (R-Ohio) has repeatedly emphasized his continued commitment to anti-abortion legislation. After Republicans won control of the House, LifeNews, an anti-abortion rights website, trumpeted Boehner’s promise that he “won’t compromise” on key issues like abortion legislation. The site made special mention of Smith’s bill. (Smith’s office didn’t return multiple phone calls requesting comment.)

The current rule preventing most federal funding of abortions, the Hyde Amendment, has to be reauthorized every year. While the amendment has been re-upped each year since 1976, the annual reauthorization fight often forces opponents of abortion rights, who generally have a majority in the House, to negotiate with supporters of those rights, who often hold a majority in the Senate.

There’s lots to negotiate: while most people think of the Hyde Amendment as one bill, in practice it is a series of negotiated provisions in a series of different spending bills. It works a little bit differently in each of them. But if the GOP gets what it wants, pro-lifers won’t have to worry about that ever again. “The beauty of the new bill is…that it will make these policies banning abortion funding in various situations permanent federal law instead of annual battles that pro-life advocates sometimes lose depending on who controls Congress and the White House,” writes LifeNews‘ Steve Ertelt.

Big anti-abortion groups are ready to throw their weight behind the effort. Doug Johnson, the legislative director for the National Right to Life Committee, has described an “urgent need” for the bill. Dems who support abortion rights don’t plan to stand idly by, either. “In the next Congress, abortion rights will undoubtedly be under siege,” says Juliet Johnson, a spokeswoman for Rep. Diana DeGette, the chair of the House Pro-Choice Caucus. “It will be unfortunate if, rather than tackling the most pressing issues facing Americans, like jobs and unemployment, the new Republican leadership use their majority to turn back the clock and attack a woman’s right to choose.”

The other big goal of conservative anti-abortion opponents is a heavier lift: defunding Planned Parenthood and groups like it. (A third big goal, banning federal funding for embryonic stem cell research, will probably be a lower priority until a court battle over the subject is resolved.) The federal money that currently goes to Planned Parenthood—some $300 million of it annually—is monitored so that none of it is used to fund abortions. Instead, it pays for things like family planning, condoms, sex education, and other programs that defenders of the group argue actually reduce the number of abortions in America. But the Republicans, led by Rep. Mike Pence (R-Ind.), a possible presidential candidate, want to cut the money anyway. Pence’s bill (HR 614) has 103 cosponsors. A version of it got 183 votes back in July 2009. But big conservative anti-abortion groups, like Concerned Women for America and the Susan B. Anthony List are pushing hard for it.

Both bills could probably pass the House with just Republican votes. But they won’t need to. Democrats who oppose abortion rights are eager to help—despite their recent whupping at the hands of their earstwhile conservative allies. In the midterms, conservative opponents of abortion rights made pro-life Dems their top targets. That effort was incredibly successful, as pro-life Dems lost re-election at a significantly higher rate than their pro-choice colleagues. Nearly half of the Democrats who voted for the anti-abortion Stupak amendment to the health care bill will no longer be in Congress next year. (By comparison, under a quarter of all House Dems were defeated.)

But if the pro-life Dems hold a grudge, they’re not showing it. Many of the defeated Dems are co-sponsors of Smith’s bill, which could easily garner several dozen Democratic votes. The surviving Dems are, if anything, even more gung-ho about the idea. Rep. Dan Lipinski, a pro-life Dem from Illinois, introduced the bill with Smith in July. (Lipinski’s spokesman said he was unavailable to comment on the bill.) “It’s the general consensus of the country that people don’t want federal funding of abortion,” argues Kristen Day, the head of Democrats for Life of America. “So to make the Hyde Amendment permanent would be a real positive step.”

Defunding Planned Parenthood is more controversial, but it has drawn Dem support before and could again. Reps. Lincoln Davis (D-Tenn.) and Gene Taylor (D-Miss.), two avowedly pro-life Dems who were defeated in November, were both co-sponsors of the bill when it was first introduced. In a Republican Congress, where the bill could easily pass, it’s not hard to imagine anti-abortion Dems voting “aye”—especially since major conservative pro-life organizations are likely to use the bill to calculate their scores of how “pro-life” members are. After the election, Day says, Dem pro-lifers are afraid “you could be thrown off the bus at any moment if you don’t [vote for] the conservative agenda.”

Of course, even voting for Pence’s bill won’t prevent the GOP from trying to find other ways to undercut the credibility of pro-life Democrats. Another House bill (HR 5111), introduced by Rep. Joe Pitts (R-Penn.), is pretty transparently targeted at pro-life Dems who voted for the health care bill. It is intended to “fix” supposed loopholes in the bill that would allow for taxpayer-funded abortions. (Never mind that the bill didn’t actually fund abortions in the first place, and President Barack Obama signed an executive order intended to close any gaps.) The group of pro-life Dems who worked with Rep. Bart Stupak (D-Mich.) for months in an attempt to strengthen the anti-abortion provisions of the health care bill was especially hard-hit in the election, and Pitts’ bill could further damage the survivors of that cadre. (It has 125 cosponsors, all Republican.)

Despite boasting pro-life records far superior to the rest of their Democratic colleagues, the Stupak Dems were top targets for conservative anti-abortion groups because they dared to disagree with the conclusion that the final health care bill and accompanying executive order allowed for taxpayer funded abortions. So far, no one has produced any evidence of a single elective abortion funded by the bill. But by passing HR 5111 as an explicit (if unneeded) “fix” to the bill, a new Republican House could help to solidify their base’s false belief that the original health care law will pay for abortions. If the President Obama or Senate Democrats blocked the bill, then Republicans could go on to (falsely) accuse them of defending taxpayer funding of abortion. Either way, it would be a win for the GOP.