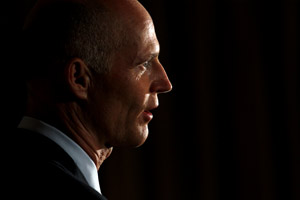 Conservatives have been plotting for years to blow up the public school system. Now, Florida’s incoming governor Rick Scott is poised to light the fuse.

During his campaign, Scott pledged to overhaul the state’s schools while simultaneously reducing school property taxes by $1.4 billion. How to accomplish both? Privatization, of course. His plan, which promotes online schooling along with other educational options, may actually pave the way for the elimination of such pesky budget busters as buses, cafeterias, teachers, and, well, school facilities themselves.

Scott’s transition office did not respond to inquiries from Mother Jones, but according to various news reports, Scott is cooking up an education proposal that would expand an existing voucher program designed for low-income and disabled kids, opening it to all students. The result would be that instead of public school funds filtering through the unionized public bureaucracy, it would go with the students, who could use the money to enroll in the school of their choice—public, private, charter, or virtual. If parents are wealthy enough to pay for their child’s education with their own funds, they can use the voucher money for laptops or school supplies, or even sock it away in a college fund. The proposed voucher amount, about $5500, is only 85 percent of the annual cost of educating a child in Florida.

Far-right conservatives have been pushing vouchers for years as a way to dismantle public schools and fund parochial schools. But Scott’s proposal may be the first to propose using vouchers as a way of also cutting taxes. The plan is modeled on one proposed by the conservative Goldwater Institute in Arizona, which last year posited that the state could save a significant amount of money if it gave parents a spiff to opt out of the public school system. It’s been supported by the Foundation for Florida’s Future—a think tank founded by Scott’s predecessor, former Gov. Jeb Bush, and run by Bush’s former education policy advisor, who is now on Scott’s transition team.

Scott’s plan is radical because it’s designed to get around a constitutional problem the state encountered a few years back when, during Bush’s tenure, it attempted to create vouchers to send public school students to private schools. But Scott apparently believes that his proposal will slip through, in part because the money could be used for other public schools. There are many flaws in Scott’s proposal. But here’s a biggie: It’s likely to be a fraud magnet.

As soon as the state starts handing families $5500 a year, it’s virtually assured that enterprising thieves will devise various schemes to help them part with those funds, including by starting “independent” for-profit virtual schools, charter schools, and other predatory “educational” institutions. While the idea of privatizing the education system may seem like a big money saver, and no one really loves school bureaucracies, putting that much taxpayer money out there without adequate oversight (i.e. bureaucracy) is a formula for disaster.

It’s not just a hypothetical harm, as charter schools in many states have demonstrated. Charter schools get paid by the number of kids they enroll, and they are free from much of the bureaucracy Republicans like to bash so much. All that money mixed with all that freedom hasn’t produced much in the way of an education boost: Charter schools perform no better and often much worse than traditional ones. But they have produced a bumper crop of fraudsters.

In recent years, the US Department of Education’s Office of the Inspector General has been raising red flags about charter school fraud and embezzlement, a problem that is increasing. In March, the OIG wrote that it had opened more than 40 charter school criminal investigations that resulted in the convictions of 15 charter school officials, with 24 cases still pending. Most of the cases involved charter school operators and employees who falsely increased enrollment figures and used the extra money to bankroll lavish lifestyles. They often engaged in testing and grade-fixing antics to ensure the money kept rolling in. At the time the report was released, prosecutors had recovered more than $4 million stolen by charter school employees and operators since 2005.

Scott, the former CEO of a health care company, should have a unique understanding of what sorts of predators lurk in the private sector searching out new ways to profit at the public trough. The company he used to run, Columbia/HCA, was quite adept at ripping off government programs. In 2003, the company pleaded guilty to 14 “corporate” felony charges and ended up repaying the government almost $2 billion for Medicare and Medicaid fraud. At the time, it was the largest health care fraud case in American history.

Scott, who claimed he was unaware of the massive fraud taking place at the company, oversaw an era when the company routinely overbilled the federal health plans, inflated patient diagnoses to increase reimbursements, gave kickbacks to doctors for referring patients to company facilities, filed false data about hospital space use, and engaged in other sleazy practices—practices that in some cases aren’t all that different from those of dubious school operators.

Even so, Scott appears ready to liberate public school parents to take their money anywhere they like, especially to online schools—a new cause célèbre for Jeb Bush, who recently launched an advocacy project called Digital Learning Now! to lobby against barriers to online public schools.

One of the hallmarks of Scott’s education reform plan is the idea that many kids don’t need to go to school at all; they can learn everything they need to in virtual classrooms. Online schools offer many cost-saving advantages, but unfortunately many of them are so bad that even the military won’t take people who graduate from them. Online schools also seem even more vulnerable to fraud than regular old charter schools.

In June, Bush spoke at a graduation ceremony at Electronic Classroom for Tomorrow, Ohio’s largest online school, which enrolls nearly 10,000 kids but only graduates 35 percent of them. ECOT didn’t get off to a stellar start, demonstrating some of the pitfalls of such schools. In its early years, the management company running the school overcharged the state $1.7 million in teaching hours it couldn’t document, as well as $500,000 in computer equipment that disappeared with students who never came back.

Scott’s education “reform” plan seems be less about actually making Florida’s schools better and more about paying private companies to run bad ones. On his transition team are a couple of CEOs of for-profit charter school companies with questionable track records, including the head of Imagine Schools, which runs underperforming charter schools in Ohio, Arizona, and Florida. Five of the 11 schools the company runs in Ohio are on an academic emergency list and another three are on an academic watch list. The Imagine School in Florida is on probation for its second consecutive “F” rating and at risk of being closed by the state. Charter schools figure prominently into Scott’s reform plans.

These are the sorts of schools that would likely be on the receiving end of Scott’s universal voucher program. It might help him cut property taxes for the state’s rich seniors and wintering hedge fund managers, but it’s hard to see how the plan does much to improve “accountability” as he’s claimed—or more importantly, improve the fortunes of Florida’s school children.