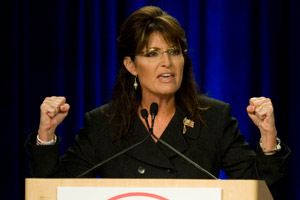 “Morning Joe” Scarborough earned a splash of attention within the politerati this week with a Politico column calling on the Republican Party to “man up” and denounce Sarah Palin. His main point is that Palin is poison for the Grand Old Party:

The most-talked-about figure in the GOP is a reality show star who cannot be elected. And yet the same leaders who fret that Sarah Palin could devastate their party in 2012 are too scared to say in public what they all complain about in private.

The GOP-congressman-turned-MSNBC-host urged his party comrades to speak out publicly against the former half-term Alaska governor. Scarborough, though, is likely to end up disappointed, because when it comes to Palin, GOPers have good cause for wimping out.

In his article, Scarborough viciously derided Palin’s qualifications: “What man or mouse with a fully functioning human brain and a résumé as thin as Palin’s would flirt with a presidential run?” And he challenged GOPers to call her out, noting, “If Republicans want to embrace Palin as a cultural icon whose anti-intellectualism fulfills a base political need, then have at it. I suppose it’s cheaper than therapy.” But, he added, if the Republican Party “wants to return to the White House anytime soon, it’s time that Republican leaders started standing up and speaking the truth to Palin.”

But Scarborough left something out: Who does he expect to go mano-a-mano with Palin within Republican circles? There are no big grizzlies with the strength to knock her out of the presidential contest. And the party structure does not afford a group of insiders the mechanism to bar Palin from the presidential jamboree, if she wants in. Some prominent GOPers have taken swipes at her. Karl Rove dissed her as a reality-TV star. Barbara Bush said she hoped Palin would stay in Alaska.

But all this was the political equivalent of a few mosquitoes buzzing around Palin. She can easily swat away such quips, and these stings don’t have much impact. In fact, though Jeb Bush said he had to side with his mother in the Babs-versus-Sarah feud “because she’s my mother,” he also praised Palin for having “an incredible skill to connect with people” and for possessing “fantastic political instincts.” That is, he played nice. Not exactly what Scarborough is looking for.

A few nasty remarks from W.’s mom, Rove, or anyone else won’t impede Palin. If she’s going to be blocked from snatching the GOP 2012 presidential nomination, it will be by her competitors: Mitt Romney, Mike Huckabee, Newt Gingrich, Mike Pence, Tim Pawlenty, Haley Barbour, and other potential presidential wannabes. Yet none of these pols will take a poke at her at this stage, because Palin, whether she runs or not, could well end up a kingmaker in the race.

In a recent poll, Palin narrowly led the GOP presidential field with 21 percent of the vote. Gingirch had 19 percent; Romney, 18 percent. And she remains popular among many Republicans, whether they are inclined to vote for her in 2012 or not. If Palin chooses not to seek the presidency, surely she will be in a position to influence the race. She could do so by endorsing a candidate—or by issuing a series of tweets and Facebook messages about the contenders. The same could happen if she runs but fails to win early and drops out. Consequently, the other probable 2012 contestants don’t want to alienate Palin and her flock. (One-fifth of the GOP voting pool is a large group to tick off.) And any Republican closely associated with any of these candidates also would not want to get on the wrong side of the woman from Wasilla. That could earn Palin’s wrath for the candidate he or she supports.

Thus, it was hardly surprising that Romney rode to Palin’s rescue, when a Politico story last month cited unnamed GOP players assailing Palin. When Palin’s new book came out, Romney kindly tweeted, “Thanks @SarahPalinUSA for the kind words in your new book about the role of faith in public life. Hope it’s a bestseller.”

It’s not in the interest of Romney and the rest of the pack to whack Palin—until it’s absolutely necessary. If she does enter the fray and goes on to become the frontrunner, at some point, the other candidates will have no choice but to fire away. Of course, it could be too late then to stop her. But as long as she is merely a presidential tease or a second-tier candidate, it will be a risky (or dumb) move for any of the candidates to slam her and upset her supporters. No doubt, each of the 2012 GOP candidates will be eager to see someone else take the first poke at Palin. But there’s a basic dynamic at play: Don’t strike the queen, unless you can kill the queen. And it’s hard to kill a queen with so many devoted followers.

From his comfortable perch in cable TV-land, Scarborough can try to foment an anti-Palin movement within the Republican Party. But given the political fundamentals—pols tend to be risk averse and refrain from taking bold steps that can hurt their career prospects—he’s not going to find too many GOPers manly enough to heed his stop-Sarah call to arms. But his crusade should make for good TV.

As proof of that last sentence, watch this: