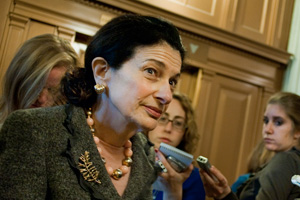 Triumphant after the GOP’s midterm victories, tea party activists quickly zeroed in on their next crusade: convincing the party that benefited from their support to adopt a ban on earmarks. Though Sen. Tom Coburn (R-Okla.) managed to schedule a vote on a two-year earmark moratorium, the measure fell short Tuesday morning on a 56 to 39 vote. Senate Democrats managed to score a rare bipartisan win by passing a larger food safety bill attached to the earmark ban, despite a hue and cry from the tea party. But though the tea party may have lost this round on Capitol Hill, a few unexpected votes suggested that the grassroots right could still have an outsized impact by extracting concessions from the most politically vulnerable members of Congress.?

“I’ve always had misgivings about the earmarks, so that has been a concern of mine, and I think it’s something we need to wean ourselves off,” Snowe told Mother Jones, explaining her reversal as she emerged from a meeting in the office of Senate Minority Whip Jon Kyl (R-Ariz.). She made a passing reference to her previous opposition to the earmark ban, noting that getting rid of earmarks could place the burden of making spending decisions elsewhere. But the Maine Republican also defended her flip-flop by arguing that the earmark moratorium reflected the political will of the country, as the 2010 elections made evident:

We have to make I think some very important gesture to the American people and their views on the way in which our money is being spent. And so this may be a small step, but I said it’s a very critical and important step to show that deference. And an election did occur—it expressed that view.

??Snowe’s rationale echoes the idea that the Republican midterm wave has bestowed the party with a mandate to push Congress rightward—a move that purportedly reflects the will of the American people, though it’s mostly just the bellowing of the grassroots right in this instance. But there’s growing speculation that legislators like Snowe may be particularly susceptible to rightward pressure given their political vulnerability in 2012. Snowe is already facing a 2012 primary challenger in a state that experienced a massive shift to the right this year, electing a tea party-backed Republican governor, Paul LePage. In recent weeks, Snowe has even jumped aboard the campaign to repeal the health care law, despite having supported the bill when it was in the Senate Finance Committee.??

On Tuesday, Snowe waved away the notion that she’s been responding to political pressure. “Oh, I’ll hear that all year long—I’ll hear that in perpetuity,” she said, denying that she was concerned about a tea party challenge. But Snowe’s reasoning that she had changed her mind because of “deference” to increasingly conservative American voters is a concession to the right all the same. My colleague Stephanie Mencimer argues that the tea party won’t be able to score its biggest wins—especially in terms of legislation passed—unless big corporate interests are also on board and that the movement’s power may be overstated. But Snowe’s recent vote suggests that the tea party-backed right is likely to wield a significant ideological impact on moderate Republicans and Democrats, even if it fails to pass—or thwart—bills. Among the Democrats who defied their party to support the earmark ban were Sens. Claire McCaskill (D-Mo.) and Bill Nelson (D-Fla.), both of whom face tough 2012 primary challenges in increasingly red states. ??

Even Sen. Jim Inhofe (R-Okla.), the most vocal GOP defender of earmarks, refused to write off the tea party right even though he criticized their anti-earmark campaign as hypocritical. “They’re all changing—they say, wait a minute, transportation that’s not earmarks,” Inhofe told Mother Jones, making reference to Rep. Michele Bachmann’s attempt to exclude certain funds from the earmark ban. Moments after the defeat of the earmark ban, tea party activists vowed to primary the Oklahoma Republican. But Inhofe dismissed the idea that he might face a serious primary challenge as a result, describing himself as “the most conservative member of the United States Senate.”

Asked whether the tea party would influence congressional Republicans moving forward, Inhofe rushed to embrace his grassroots brethren: “I believe they will, and I’m depending on the fact that they will—for [the GOP] to get things done that we need to get done.”