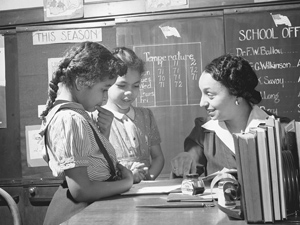 What if alleged Arizona gunman Jared Loughner had sought mental health help when he first started to spiral down? MoJo education blogger Kristina Rizga explains how bureaucratic red tape and budget woes get in a troubled high-schooler’s way.

Meanwhile, it could take Washington state 105 years to close the gap between black and white students in fourth grade reading, according to a 40-state report by the Center on Education Policy cited Tuesday by Education Week. On Tuesday, Education Week also posted a report by the US Government Accountability Office: Family job loss, foreclosure, and homelessness may be why 13 percent of American students transfer schools four or more times. Worse, the same transfer students frequently have lower standardized reading and math test scores and higher dropout rates. According to the GAO report, these students are also disproportionately poor and African-American.

Why are Black and Latino kids in Texas performing one to two grade levels higher than their peers in California? Washington Post columnist Kevin Huffman argues that California has a systems problem; schools and social safety nets are behind the success in Texas.

In North Carolina, a tea party-backed, largely Republican school board has voted to abolish school integration policies, WaPo reports. Daily Kos has the details on the school board’s new superintendent, Brig. General Anthony Tata—a former FOX news commentator whose Facebook “likes” include Glenn Beck and Sarah Palin. In an effort to stop the reassignment of thousands of black and Latino students, the National Association for the Advancement of Colored People has filed a civil rights complaint.

Also this week, New Jersey Gov. Chris Christie announced that he wants to eliminate tenure for public school teachers and install a system of five-year teacher contracts instead. Districts can then renew these contracts based on merit, reports the Wall Street Journal. Now also clamoring to join the anti-teacher tenure camp: Idaho, Ohio, and New York.

On Sunday, 60 Minutes broadcast the news that there were 140 errors in a fourth grade history book used in Virginia public schools. One example is the assertion that a number of African-Americans fought for the Confederacy during the Civil War. Read The Atlantic’s Ta-Nehisi Coates for a primer on why that’s false.

And speaking of slavery, would you teach Mark Twain’s Huck Finn in a high school level American Literature class? This week I sat down with a black English teacher at Mission High who explained why the racial epithet alone wouldn’t keep the book out of his classroom.