In August, I reported that the Florida Attorney General’s Economic Crimes Division, in response to widespread allegations of foreclosure fraud, launched an investigation into three of the Sunshine State’s biggest and most notorious foreclosure “mills,” including the Law Offices of David J. Stern, the subject of a long Mother Jones investigation. (The Florida AG was already investigating one mill at the time, the Florida Default Law Group.) Last week, the AG’s office released some of the fruit of its labors: a 98-page presentation, by turns eye-opening and snarky, on the types of foreclosure deception endemic in Florida’s overloaded courtrooms and battered housing market. It’s one of the best reads you’ll find about foreclosure lawyers run amok, lawless mortgage servicers, “robo-signers,” and more.

It’s hard to know where to begin with the Florida AG’s report. Florida investigators found numerous instances of outright forgery in crucial foreclosure documents. These included assignments of mortgage, which give mortgage servicers the legal right to the foreclose. The AG’s presentation offers up six documents signed by a now-notorious foreclosure employee named Linda Green. The rub? Green’s signature is visibly different on each of those six documents. Now, imagine that kind of forgery taking place on a scale of “hundreds of thousands” foreclosure documents, the amount Green signed, according to the AG. Not only was Green’s signature cause for concern, but her name alone was a problem, as she was listed as an officer at dozens of mortgage companies and banks. In other words, the many variations of Linda Green could only exist in the lawless world of Foreclosureland, where thousands of bogus documents she signed were passed off as legitimate and used to seize people’s homes. 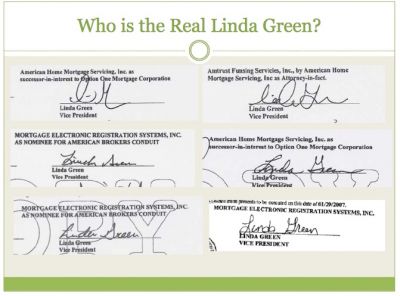 The AG’s presentation goes to highlight clear cases of document backdating by foreclosure firms and mortgage servicers, which I reported on in August. The presentation’s conclusions, while not entirely new, are damning stuff nonetheless, especially coming from a state attorney general’s office. They include: