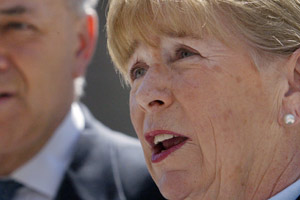 If you stand up for the second amendment, the NRA will stand up for you—that’s what the gun rights juggernaut claims, at least. But, increasingly, the lobby’s incestuous relationship with the gun manufacturers begs the question: Is the the NRA advocating for people who own guns? Or the lucrative companies that make them?

Highlighting this dynamic, the Center for Public Integrity’s Peter Stone writes about MidwayUSA, a gun manufacturer that sells high-capacity magazines similar to the one used in the Arizona shooting spree, and its close ties to the NRA’s lobbying wing. In 1992, Midway developed a lucrative fundraising tactic to curry favor with NRA, known as “round up”: Midway asks customers to round up the total of each order they place to the nearest dollar or higher, then donates the difference to the NRA’s lobbying shop, known as the Institute for Legislative Action. But the relationship between Midway and the NRA doesn’t end there. Brenda Potterfield, the wife of Midway’s CEO, is the vice president of the NRA Foundation’s board of trustees.

A number of other gun manufacturers have adopted the technique, reports Stone. Together with Midway, they’ve funneled $7.5 million to the NRA, $5.7 million of that coming just from MidwayUSA. As Stone reports:

With sellers like Midway and Barrett under fire by lawmakers like Rep. Carolyn McCarthy (D-NY), who is floating a bill that seeks to ban the transfer, importation, and possession of high-capacity magazines that hold more than 10 rounds, the NRA’s lobbying wing has rushed to their defense. “While those of us who defend the Second Amendment were respecting the heartache of the people of Tucson and waiting to learn the full facts of the case, anti-gun activists were renewing their push for more gun control laws,” the NRA-ILA wrote in a recent statement specifically calling out McCarthy’s bill.

The White House has yet to throw its support behind McCarthy’s bill, and Hill watchers don’t seem to like its chances. If it fails, that’s another win for the NRA and the industry players they represent.