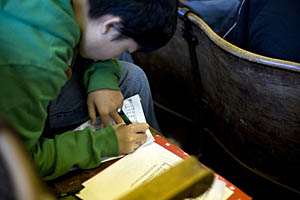 Looks like the “parent-trigger law” debate is heating up between Compton’ pro-charter parents and the Compton Unified School District.

If you haven’t been following the news out of Compton, last month I blogged about how parents of kids attending LA’s public McKinley Elementary School are trying something new: Shutting down the chronically struggling institution and demanding that it be replaced by a charter school. And yes, they can do that—thanks to a new parental option called the “parent-trigger” law, which allows parents to force big changes at the state’s lowest-performing schools, if they can gather signatures from 51 percent of the parents whose kids attend a failing school. McKinley parents and advocates gathered the signatures they needed, but now Compton Unified wants them verified. Last month, there were some reports of alleged intimidation tactics while these signatures where gathered.

A press release I received says that McKinley parents are meeting right now to decide their next steps:

“Every parent who wants change at McKinley must now show up at the school on either Wednesday or Thursday of next week, endure a mysterious five-minute interview with district employees, and declare their support in this interview for change. In addition, they must present photo identification at this interview, a requirement that even supersedes the requirements to participate in state and federal elections in California and would undoubtedly have a chilling effect on a community of people of color and immigrants. … Any parent who is unable or unwilling to complete this process for any reason—such as being sick or unable to get out of work on such short notice—will no longer be able to count towards the 61% of parents who have demanded change under the Parent Trigger law, regardless of whether they have already met the legal requirements to do so under the Parent Trigger and the State Board.”

LA Weekly reporter Patrick Range McDonald has been following this case, and will post an update when he returns from the meeting. Here’s what he blogged before he ran off to the press conference:

“President Barack Obama’s Education Secretary Arne Duncan backed the Parent Trigger effort in Compton, but as things have gotten more and more tense, the feds have been publicly missing in action …. despite the fact that Compton parents have filed complaints with the feds.

Governor Jerry Brown has also been nowhere to be found, although Compton Unified officials are undertaking questionable tactics that could undermine a state law. California Attorney General Kamala Harris has been absent, too.

Since state and federal politicians seem unwilling to ensure that Compton Unified authorities abide by the law, maybe former President Jimmy Carter, who’s been known to observe democratic elections in various parts of the world, needs to come into town and play sheriff.”