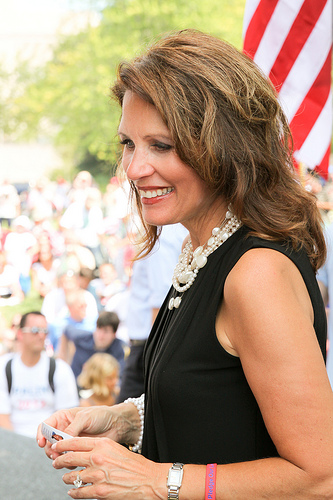 Did Republican presidential aspirant Tim Pawlenty just nudge Rep. Michele Bachmann (R-Minn.) one step closer to the 2012 presidential election? During a visit to Iowa on Sunday, Pawlenty, the former Minnesota governor, sung the praises of Bachmann, the far-right congresswoman who heads the tea party caucus in Congress. Fielding questions as he signed copies of his new book, Courage to Stand, at a Family Christian bookstore, Pawlenty said, “Congresswoman Bachmann is someone I have a cordial and positive relationship with. I don’t know if she’s going to run for president. If she does run, she’ll be a strong candidate.”

Bachmann appears to agree with Pawlenty’s assessment. After all, she recently headlined a 300-person reception in Des Moines hosted by Iowans for Tax Relief. And on that same trip Bachmann met with powerful Iowa Republicans, including Governor Terry Branstad and Kraig Paulsen, the Iowa state House Speaker. These kinds of meetings strongly suggest Bachmann is developing a strategy for the 2012 Iowa caucuses, the opening battle in every presidential race.

Pawlenty’s praise for Bachmann comes as no surprise. While Pawlenty appeals to a broader, more moderate Republican base, he doesn’t have the kind of support in tea party circles that Bachmann or Sarah Palin do, the latter being a potential 2012 candidate Pawlenty has previously lauded. The former Minnesota governor could just be currying favor, trying to lock up Bachmann’s support should she decide not to run or drop out of the race. He also could be making a play at landing Bachmann as a potential running mate, which would expand his pool of supporters. Either way, Pawlenty knows that, heading in the 2012 campaign, his odds at winning the White House only improve if he’s got Michele Bachmann on his side.