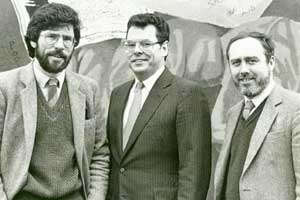 When it comes to matters of national security, Rep. Peter King (R-N.Y.) has never been accused of holding back. So when the political world suffered a collective freak-out over leaked diplomatic cables late last year, King, the top Republican on the House homeland security committee, naturally led the charge. In a letter to Attorney General Eric Holder, King warned that WikiLeaks’ release of the classified documents amounted to supporting terrorism.

But according to experts in counterterrorism law, if the tough-on-terror policies King trumpets today had taken effect a few decades earlier, King himself might have been subject to prosecution. Over parts of three decades, from his days as an aspiring politician in Long Island through his early years in Congress, King was one of the nation’s most outspoken supporters of the Irish Republican Army and a prolific fundraiser for the Irish Northern Aid Committee (NorAid), allegedly the IRA’s American fundraising arm. The IRA waged a paramilitary campaign against the British presence in Northern Ireland for decades before peace accords were signed in 1998. Part of that effort included bombings and shootings that resulted in civilian deaths in England and Northern Ireland. During the period of King’s involvement, the US government accused both NorAid and the IRA of links to terrorism.

Federal laws signed by President Bill Clinton and bolstered by the USA PATRIOT Act make it a felony, punishable by up to 15 years in prison, to provide resources, training, or expert advice—so-called “material support”—to any group that’s been designated a terrorist organization by the State Department.

Georgetown University law professor David Cole, who unsuccessfully challenged the material-support law before the Supreme Court last winter, said King’s fundraising exploits would “without a doubt” constitute a violation of the statute. In other words, Cole believes King would have been guilty of the same crime the congressman accused WikiLeaks of committing. “Just going to a bar and putting your change from your beer into the NorAid can is enough; you don’t have to be the leader of the organization,” Cole says. “It’s any support to the group that’s criminalized.”

Although its leaders insisted that NorAid funds were meant to provide assistance, mainly to families of imprisoned IRA members, the steady cash flow from the States—more than $6 million was raised, by some estimates—effectively freed up funds for the IRA’s often-violent brand of political advocacy.

“The statute is pretty broad in terms of what constitutes material support,” explains American University law professor Stephen Vladeck, who has worked on detainee issues in the past. “The real key would be whether it was clear that whoever it was, Congressman King or anyone else, knew or should have known of the underlying relationship.”

Plausible deniability, in other words. But NorAid’s terror ties were hardly a secret. The Justice Department launched numerous probes of group leaders for smuggling weapons into Ulster (their boasts to the press might have been a tip-off), and in 1981, a federal judge ordered the group to list the IRA as its foreign principal, stating that there was “uncontroverted evidence” that NorAid was “providing money and services for other than relief purposes.”

Throughout all of this, King embraced a role not entirely unlike the one he plays today: a metaphorical bomb-thrower. He raised money for NorAid, spoke at its events, and tirelessly championed the anti-British cause. In 1985, he convened a press conference before the start of New York City’s St. Patrick’s Day parade (for which he was Grand Marshal), and offered a defiant defense of the IRA: “As we march up the avenue and share all the joy,” he declared, “let us never forget the men and women who are suffering and, most of all, the men and women who are fighting.” In an interview with the New York Times two years later, King put his role in historical context: “I’m the Ollie North of Ireland,” he declared.

British censors kept King off the airwaves (no small feat), and frequent newspaper profiles made note of his “militant” rhetoric, fierce support for the IRA, and prolific fundraising. So reviled was King across the pond that when New York’s archbishop dared to embrace King at the city’s St. Patrick’s Day parade, London’s Daily Mail dedicated an entire editorial to the affair and called it the “handshake of shame.” Exchanging formalities with the then-comptroller of Nassau County, the paper explained, was tantamount to slapping terror on the back.

There’s little doubt, in other words, that King knowingly provided resources to the IRA. And through his close association with Sinn Fein’s Gerry Adams, the leader of the IRA’s political wing, he may have even provided coordinated advocacy: Congressman-elect King lobbied for Adams to be a guest at Bill Clinton’s inauguration.

What’s less clear is how hard the US would have come down on the IRA. The group never targeted Americans or American assets, and it held a good deal of support in the Northeast. As Vladeck puts it, “It’s important to separate the law from the politics.”

Was the group the “legitimate force” King always maintained, or a terrorist organization? In one sense, King was right: The IRA has never appeared on the State Department’s list of terrorist organizations since the law took effect in 1996—although two splinter groups did make the cut. But Cole says that’s mostly a matter of timing. “The scuttlebutt at the time, anyway, was they didn’t want to name the IRA, because they were trying to encourage peace talks,” he says. “On the one hand, they couldn’t not name the IRA as a terrorist organization. On the other hand, politically they didn’t want to, so they just didn’t name anybody for more than a year [until an agreement had been struck].”

Prior to the creation of a legally binding list, the government did issue an annual report on international terrorism—and the IRA was in it. In 1988, three years after King’s activities earned him the scorn of the London tabloids, a State Department report (PDF) on global terrorism called the organization “a deadly terrorist group unconcerned about innocent bystanders,” in reference to a bombing that killed 11 and left 70 people wounded. What’s more, the report noted, the firepower for those attacks may have been supplied by Libya, which at the time was considered by the Reagan administration to be a state sponsor of terrorism.

Nor does it matter much that the IRA never targeted American civilians or assets.

“We’ve listed the Chinese Uighur groups and other groups—the ETA, the Basque group—that have nothing to do with the US threats, but everything to do with US foreign policy,” says Robert Chesney, a professor at the University of Texas who served on the Obama Justice Department’s Detainee Policy Task Force. “It’s sort of an international quid pro quo process.”

Besides, as Chesney notes (PDF), part of the reason there was no material-support law at the time of King’s activism was because of the backlash from American checkbook revolutionaries like King. The Reagan administration twice sought to ban material support for terrorist organizations, but those efforts fizzled, in part because of fears that such legislation might curb funding for popular causes like the Provisional IRA, Nicaraguan Contras, or Nelson Mandela’s African National Congress.

King isn’t the only conservative who says one thing and does another when it comes to material support. Last month, a panel of Bush-era luminaries—Rudy Giuliani, former Homeland Security Secretary Tom Ridge, and former Attorney General Michael Mukasey—traveled to Paris to speak at a conference in support of Mujahideen-e-Khalq, an Iranian Marxist group that’s opposed to the Ahmadinejad regime but has landed on the State Department terror list (the designation cannot be challenged in court). Because the event’s organizer, the French Committee for a Democratic Iran, was formed to build support for the MEK, Cole says the trio’s advocacy constituted a clear breach of federal law.

“If [King] thinks that what he did was not wrong, but he’s advocating for that kind of treatment of others, he’s engaged in essentially selective enforcement of this principle. And that’s certainly true of the case of Giuliani,” Cole says. “I think they have the right to do what they do as a constitutional matter, but I lost that argument.”

King’s office did not respond to a request for comment.