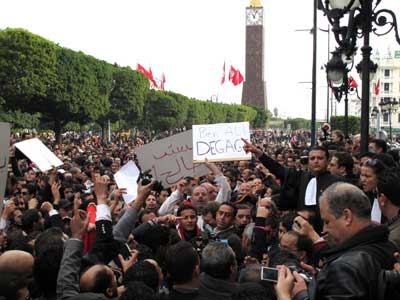 Tunis, Tunisia: Thousands of demonstrators took to the streets of the capital on Friday to demand the president's resignation, despite concessions in his speech on Thursday. | © Maxppp/ZUMAPRESS.com.

Reports just emerged around 12:30 p.m. Eastern time that the Tunisian dictator, Zine El Abidine Ben Ali (Ben Ali), has fled the country and the Army has taken power. (Also: We have a scoop about how Washington Media Group, the DC public affairs firm that Tunisia hired to rehab its image, abruptly booted the country from its client roster last week.)

Want to know what’s happening in Tunisia? Let me explain:

What is Tunisia? Tunisia is a mostly Arab, mostly Muslim country in North Africa. It is on the south side of the Mediterranean sea, east of Algeria and west of Muammar Gaddafi’s Libya. Its capital is Tunis, and it has been ruled by dictators since it won independence from France in 1956. The current ruler, Zine El Abidine Ben Ali (Ben Ali), has ruled since 1987. He is the kind of ruler who gets re-elected with 90 percent of the “vote.”

What’s happening? Violent riots and protests have spread across the country over the past four weeks. Now Ben Ali’s totalitarian government seems to be collapsing. (Elliott Abrams, a former Bush administration official who unfortunately is rarely right about anything, thinks that if democracy can take hold in Tunisia, it could spread elsewhere in the Arab world, too.)

Why are Tunisians unhappy? Well, they don’t have much freedom. But there also just aren’t enough jobs. Official unemployment is 13 percent, but it’s probably actually much higher. The combination of a repressive regime and a faltering economy is often bad news for the regime. Plus, the regime has diverted a lot of the country’s wealth to Ben Ali’s family and friends, so people are really upset about official corruption.

How did it all start? On December 19, authorities in the small, central city of Sidi Bouzid seized the produce cart that 26-year-old Mohamed Bouazizi was using to make a living. So Bouazizi set himself on fire. Young people in the small, central city of Sidi Bouzid rioted, and police moved to seal the city. In early January, Bouazizi died, becoming an early martyr for the cause. Brian Whitaker, the Middle East editor of the Guardian and a Tunisia expert, has a good article explaining how Bouazizi and Sidi Bouzid got the ball rolling on revolution.

Shortly before the December protests began, WikiLeaks released internal US State Department communications in which the American ambassador described Ben Ali as aging, out of touch, and surrounded by corruption. Given Ben Ali’s reputation as a stalwart US ally, it mattered greatly to many Tunisians—particularly to politically engaged Tunisians who are plugged into social media—that American officials are saying the same things about Ben Ali that they themselves say about him. These revelations contributed to an environment that was ripe for a wave of protest that gathered broad support.

What’s the latest news? A visibly shaken Ben Ali appeared on national television Thursday night, promising reforms and indicating that he would step down in 2014. But protests only grew larger on Friday. The very latest—i.e., what happened Friday afternoon—is that Ben Ali has fired his cabinet and promised legislative (but not presidential) elections in six months. Then he declared a state of emergency. He’s trying to buy time. But the regime is clearly reeling, and there are unconfirmed reports of gunfire in the capital. Police are definitely shooting at protesters, according to an American quoted in this New York Times report. Whatever is going to happen could happen soon. The very very latest is that Ben Ali has fled the country, according to Al Jazeera, and the Army has taken power.

How do I follow what’s happening in real-time? Your best immediate resource is the Twitter feed of Sultan Sooud Al Qassemi, a columnist for The National, the United Arab Emirates’ leading English-language newspaper. The hashtag to follow (or “feed,” as the Times mistakenly dubbed it) is #sidibouzid, after the city where the first riots took place. #tunisie is another good option. Al-Bab, a blog written by Brian Whitaker, the Guardian Middle East editor mentioned above, is indispensable. Whitaker’s latest posts—”Tunisia: Double or Quits,” and “Tunisia: The Last Days of Ben Ali” are must-reads. If you’re looking for a more US-centric view, you should also check out “Tunisia on the Brink of Revolution?” and “When Pro-Western Regimes Fall: What Should the US Do?” over at Democracy Arsenal.