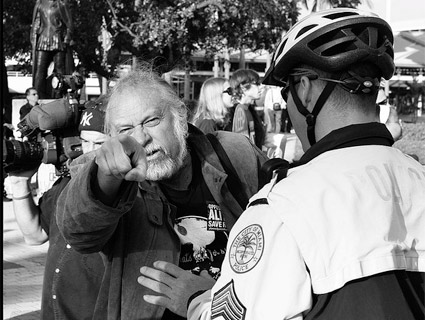 The Kansas judge who last week barred a doctor from providing abortion services in her Wichita office has, in the past, supported anti-abortion causes, according to state election records. His contribution to a political operation run by abortion foes raises questions about whether his personal views on abortion pose a conflict of interest in the case.

Last Monday, Judge Jeffrey Goering granted a temporary restraining order barring Dr. Mila Means from offering abortions in her Wichita office, which had been requested by the buliding’s owner, Foliage Development Inc. In October 2009, Goering made a $100 donation to the Kansans for Life Political Action Committee. The PAC is connected to Kansans for Life, one of the groups leading the campaign to keep Means from providing abortions in Wichita.

Last week, the group sent a letter to supporters warning that a “grave evil threatens our community” and accusing Means of attempting to set up “a killing center.” Rallying its supporters against Means, the group even held a prayer service on Friday across the street from where abortion doctor George Tiller was murdered in May 2009.

Means, who is currently in training to provide abortions but hasn’t actually started doing so, would be the first doctor to provide such services in Wichita since Tiller’s assassination. But her landlord, Foliage, argued to the court that she would be creating a “nuisance” on the premises—citing concerns about anti-abortion protesters descending on the building. The landlord’s complaint cites threats of protest from two other anti-abortion groups, Kansas Coalition for Life and Operation Rescue, as the reason Means should be blocked from providing abortions.

Goering did not respond to request for comment. Before he was elected to serve as a judge in 2005, Goering spent two years in the state legislature, where he was described as a “conservative Republican.”

Goering isn’t the only judge in the district whose ties to anti-abortion groups have raised conflict-of-interest concerns. Fellow Sedgwick County Judge Anthony Powell was staunchly anti-abortion during his tenure in the state legislature and had to recuse himself from handling a 2007 lawsuit against Tiller due to his vocal support for anti-abortion causes. Another district judge, Eric Yost, made six separate $100 donations to the Kansans for Life PAC in 2009, and the group has recognized him with its “Pro-Life Patriot” award.

While Goering’s contribution may not violate the judicial code of conduct, it certainly does raise questions about his impartiality, says Adam Skaggs, counsel at the Brennan Center for Justice at the New York University School of Law. “Any judge who rules on an issue that they have been associated with by funding an organization that works on that issue creates, at the very least, the appearance of problems,” he says. “In any situation where a judge has given, they should step aside from hearing a case involving such an issue.”

Means is slated to appear in court again on February 15 in response to the restraining order Goering granted last week.