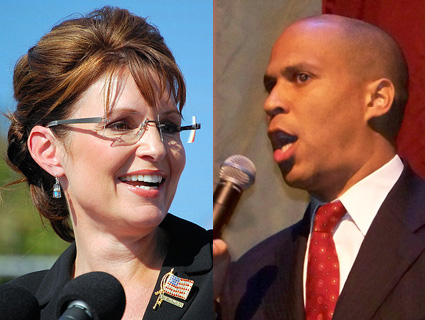 Tankers of ink have been spilled analyzing Sarah Palin’s use of Facebook and Twitter to end-run the “lamestream media” and control her message. That strategy has its downsides, as Palin discovered when she posted an ill-timed and solipsistic video after the Tucson shooting. The resulting “re-re-re-reaction,” as Stephen Colbert put it, prompted Morning Joe co-host Mika Brzezinski to ask, “At what point do we just ignore her?” and Washington Post columnist Dana Milbank to pledge himself to a month of Palin abstinence (February, but still). All in all, though, Palin’s approach has worked well—she’s the queen of what in the political ad biz is known as “free media.”

Meanwhile, another politician is mastering earned media (yes, same thing, but bear with us). Cory Booker, a Rhodes Scholar and Stanford football star, first gained notoriety when he moved into Newark’s notorious Brick Towers after becoming a city council member. Then, in 2002, he tried to oust Sharpe James from his 16-year perch as mayor. Booker, derided as a carpetbagger and “not black enough” by James and his supporters, lost that race, but an Oscar-nominated documentary, Street Fight, brought him wider attention and guaranteed a rematch with the James machine. Still living in Brick Towers, he became mayor in 2006 and quickly lowered the homicide rate by an astonishing 36 percent, and doubled the number of affordable housing units, all while slashing the deficit and raising the salaries of many city workers.

This is remarkable stuff. But what propels Booker into the once-in-a-generation stratum of leaders is how he has enlisted his constituents to fight for a better city—and how he has used social media to do so.

Booker keeps up an awe-inspiring Twitter feed. He fields—and acts upon—complaints about broken streetlights and fire hydrants. He quotes philosophy and Scripture. He reminds Newarkians how to report landlords who don’t turn on the heat. When Jersey Shore “star” Snooki tweeted “Ugh stuck in Nwk traffic is no fun,” he replied, “Snooki! I’m the mayor where R U so I can give u a ticket 4 texting & driving we needs revenue!” He’s also got the city—and followers from around the world—joining his weight-loss efforts via the #letsmove hashtag.

Snooki! I’m the mayor where R U so I can give u a ticket 4 texting & driving we needs revenue! RT @Sn00ki Ugh stuck in Nwk traffic is no funless than a minute ago via web

The white media elite were gobsmacked when the Pew Research Center revealed that the highest penetration of Twitter was in black and Latino communities. But Booker understood that with a text-based technology, the barrier to entry was low and the potential for participation was high—something that consultants had long been lecturing other politicians about, to little avail.

When a massive snowstorm hit the tri-state area, New York Mayor Michael Bloomberg lost face for his pokey response. New Jersey Gov. Chris Christie caught hell for riding out the storm at Disney World. But Mayor Booker not only responded to pleas to plow certain roads, look in on an aged relative, or bring a desperate mom diapers—he showed up personally, working until 2 or 3 a.m. Not that he didn’t ask his constituents to help out. When TaJuan Bonds told the mayor he had to dig himself out “on bergen & grumman ave,” Booker showed up and tweeted: “Wow u shud b ashamed of yourself. U tweet vulgarities & then I come out here to help & its ur mom & sis digging. Where r u?” (The guy quickly appeared.) Booker was so effective that New Yorkers started pleading for his help: “Hey @CoryBooker if you come plow my street in Brooklyn, I’ll vote for you when you run for President. Bloomberg hasn’t done jack.” And check this tweet from Donald Rumsfeld: “Snow is coming down hard in New Mexico. Joyce says I have to shovel. Told her that Mayor @CoryBooker should be here any minute.” Donald effing Rumsfeld.

Yes, the Obama era fizzled fast. But “Yes We Can” is a message that still resonates with Americans, whether it comes from their mayor, their neighbor, their pastor, or their president.

Okay, so Cory Booker’s a good mayor, who just might be in possession of a time turner. But he didn’t need any more love from the media—he had us at Snooki—so what’s the larger point?

This: As Kevin Drum explains in our cover story, politicians de facto don’t respond to the needs of ordinary people anymore. With unions decimated, there is no longer any institution that can counterbalance the clout of the ultrawealthy.

Two years ago, it seemed like this was about to change. Obama for America moved millions of people to gather across race, class, and generational boundaries. It amassed an email list of 13 million names, 4 million donors, and 8 million people who’d volunteered to actually work for the campaign. Yes, the Obama administration—maddeningly—then proceeded to put its most powerful asset in deep freeze. But the fact remains that “Yes We Can” is a message that still resonates with Americans, whether it comes from their mayor, their neighbor, their pastor, or their president.

Can Populism 2.0 be sustained without the urgency of a presidential race? It remains to be seen, but in the tweets of Cory Booker, in the enthusiasm of his constituents, and in the enduring lessons from the high points of the Obama campaign, there is an inkling of how it might be done.