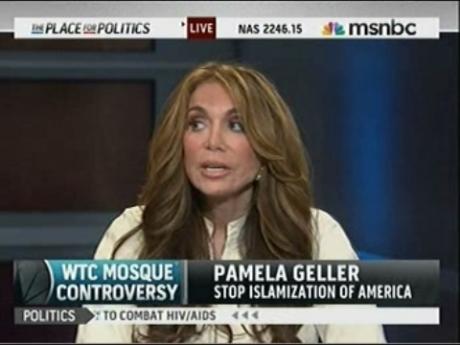 The news of Egyptian president Hosni Mubarak’s resignation today has barely made a ripple here at CPAC, the three-day gathering of conservative activists, politicians, and other luminaries. But around midday I caught up with Pamela Geller, who made a name for herself as the driving force behind the battle against the Park 51 Muslim community center in lower Manhattan, which critics dubbed the “Ground Zero mosque.” I asked Geller what she thought about Mubarak’s resignation and the fate of Egypt’s leadership. Her take was nothing short of apocalyptic, predicting “the rise of Islamic supremacism and the imposition of the Sharia” throughout the Middle East.

“We are witnessing a complete seismic shift in the direction of the world away from freedom,” Geller said. When I asked her about Glenn Beck’s theory that “uber-leftists” and Islamic extremists could be plotting to from a new Islamic caliphate, she told me that those “are justifiable fears. An earthquake has occurred in the Middle East.” She added, “These are catastrophic events over which we have no control.”

Geller said she was “thoroughly embarrassed and disgusted” that the US “would abandon an ally,” a reference to the Obama administration’s recent statements calling for a peaceful change in leadership in Egypt, which had been under Mubarak’s autocratic rule for nearly 30 years. Asked about who she thought would step up to lead in Egypt, Geller said, “We do know that evil loves a vacuum, and the only organization that is poised to seize control in a vacuum would be the Muslim Brotherhood.” She went on, “They will be the ones that seize power.”

Middle East experts don’t view the Brotherhood as the virulent force of evil that Geller and the far right do. As Bob Dreyfuss noted in his Mother Jones story today, the Brotherhood would win only around 10 or 20 percent of the vote in a open Egyptian election. That’s not to the say the Brotherhood should be dismissed, but experts say they’re not quite the pillar of evil Geller, Beck, and others have made them about to be.

Geller ended our conversation about the future of Egypt on a typically ominous note. I mentioned the far right’s fear that Islamic radicalism could spread to other Middle Eastern countries after Mubarak’s departure, and Geller agreed. “It is spreading. It’s already spreading,” she said. “And it’s very dangerous.”