Earlier this week, a Georgia legislator introduced the “American Laws for Georgia Courts Act,” a bill designed to block the implementation of Islamic law in state courts. As state rep. Mike Jacobs told the Fulton County Daily Report, he couldn’t think of any specific instance of Sharia law affecting Georgia’s justice system, but the government needed to take action. It’s a familiar pattern: While actual Islamic law is virtually non-existent in the United States, efforts to combat the scourge of Islamic law are becoming increasingly common.

Just how common? According to the National Conference of State Legislatures, 13 states have introduced legislation to prevent courts from using foreign or religious law in their decisions. But that’s just in the last two months; if you include last year’s efforts—including Arizona’s inspired attempt to ban karma—it goes all the way up to 16. Anyway, I made a map. Full details below; we’ll update this as the dominoes fall: 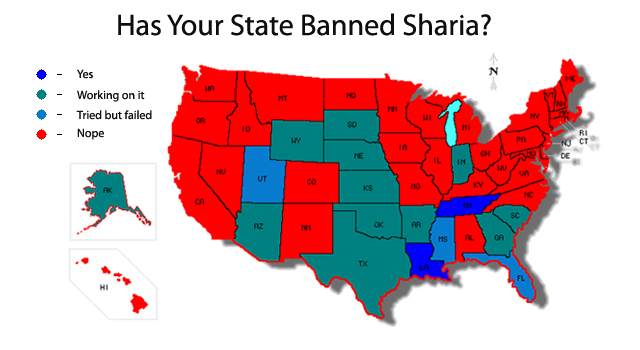 Passed: Both Tennessee and Louisiana passed variations of the American Public Policy Alliance’s “American Law for American Courts” legislation in 2010.