Read the Feral Pig Diaries: “Day 1: Moonshine and Teen Swine” is here; “Day 2: Do Hogs Like Supermarket Danishes” is here; and “Day 3: OK, but How Does Wild Hog Taste?” is here.

On Monday I dragged fellow MoJo staffers Mac McClelland and Adam Weinstein with me to our (sort of) local shooting range. What, you may ask, were some hippies like us doing in a place like this? Well, I needed to learn to shoot for an upcoming reporting trip. I’ll explain that part in a second, but first, some pictures and a video clip of our afternoon:

We piled into my car and drove out to Jackson Arms, a shooting range within spitting distance of San Francisco International Airport. (File this fun fact away for your next layover.) Once inside, Adam passed a quick test so we could rent a few guns and a rifle lane—novice shooters like me must be accompanied by at least one experienced marksman, house rules. I was the only novice in the crowd: Adam is a Navy veteran and grew up around guns, and Mac was a great marksman in college. 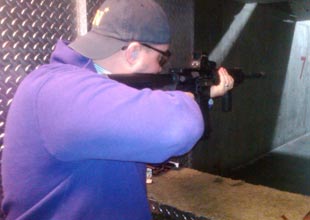 Adam showed me how to load, carry, and shoot the gun safely, then we headed into the rifle range. Above, Adam fires off a round on the AR-15. Doesn’t he look cool? Both he and Mac were total badasses shooting this gun, which made a big noise and had quite a kick. In a moment that probably would have reminded my mother of the time when, at age five, I had to be carried out of the lightning show at the Boston Science Museum because it was too loud and scary, I declined to shoot the AR-15 and decided to stick to this gun instead: 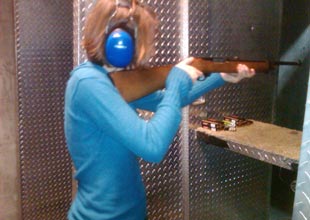 Yes, this Ruger 1022 semiautomatic rifle is very one-if-by-land compared to the AR-15. At first I was aiming pretty well, hitting the evil clown target (see below) right between the eyes. But by my fourth round or so, my beginner’s luck had worn off considerably. Also, I was freezing; the range was, for some reason, like a meat locker. Mac and I decided to go warm up in the lobby for a minute. I took out my granola bar and asked the guy behind the counter if it was okay to eat it, at which point Mac tweeted, “Kiera to attendant: ‘Can I eat my granola bar in here?’ #MotherJonesGoesToTheFiringRange!” Then, as I was eating my granola bar I noticed a sign about how you should always wash your hands after handling ammo, and I started worrying about whether hunters inadvertently give themselves lead poisoning. Like Mac said, #MotherJonesGoesToTheFiringRange! 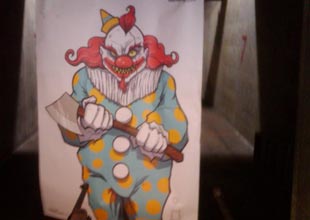 The sheer variety of paper targets for sale at Jackson Arms really surpassed my expectations. We selected this evil clown, a man zombie, a lady zombie, and a few plain old bullseyes. While I had no qualms aiming for this clown’s big red nose, Mac remarked, “It feels weird to shoot the lady zombie in the boobs.”

Unfortunately I don’t have a video of Mac and Adam shooting, since my phone is the opposite of smart. But this one, which Adam took, shows me shooting and Mac sweeping up some bullet casings and generally looking cool.

Now back to the reason for the trip to the shooting range: Next week, I’m headed down to rural Georgia to work on a story about invasive species—specifiically, the idea that the best way to get rid of destructive non-native animals is to get people to eat them. Jackson Landers, a.k.a the Locavore Hunter, aims to whet American appetites for invasive species like lionfish, geese, deer, boar, and even spiny iguanas by working with wholesalers, chefs, and restaurateurs to promote these aliens as menu items. As Landers recently told the New York Times‘ James Gorman, “When human beings decide that something tastes good, we can take them down pretty quickly.”

I’ll be accompanying Landers and a few of his friends on a hunt for invasive feral pigs, which have proliferated over the last decade in much of the southeastern US, competing with native species for food and wreaking havoc on farmlands with their rooting. They’re particularly problematic in coastal areas, where they eat the eggs of endangered sea turtles. (A few years ago, Ian Frazier wrote an eloquent New Yorker piece about the hog population explosion; among his observations: “The presence of feral hogs in a state is a strong indicator of its support for Bush in ’04.”)

Let’s be clear: I’ve never wanted to go hunting before. I come from a family that likes creatures the way other families like football. Some of my earliest memories are of my dad hustling me outside to listen to migrating Canada geese honking overhead. More recently, he has been known to imitate yipping coyotes, loudly and gleefully, at the dinner table. Needless to say, my father is not pleased about my upcoming pig trip. When I explained to him that we were hunting animals that didn’t belong here and were forcing out native species, he countered: “Yeah, and immigrants are taking our jobs, too, isn’t that right, Kiery?”

No doubt many of you guys agree with my dad, and you’ll probably tell me so in the comments section of this post and elsewhere. (I’m looking at you, Vegansaurus!) I don’t mean to be flip about any of this. If we do end up shooting a pig, Jackson has generously offered to show me the whole butchering process. We’ll try to make use of the entire animal. I’m not sure how I’ll feel when I’m actually on the trip, but I’m going to be thinking a lot about ethics. I’ll be chronicling the whole thing here on the Blue Marble. Let’s call it the Feral Pig Diaries.

Read the Feral Pig Diaries: “Day 1: Moonshine and Teen Swine” is here; “Day 2: Do Hogs Like Supermarket Danishes” is here; and “Day 3: OK, but How Does Wild Hog Taste?” is here.