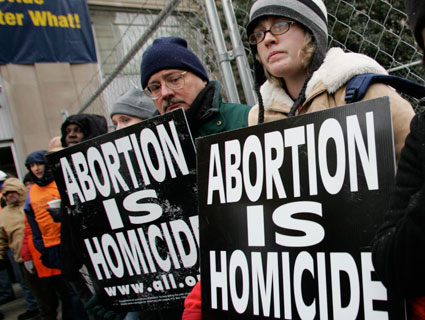 The first doctor to try to offer abortion services in Wichita, Kansas, since Dr. George Tiller was gunned down in a church in May 2009 has been blocked from doing so—by her landlord, who has claimed this would create a “nuisance.” And groups opposed to abortion rights are hailing this development as a major win on a prominent frontline in the national war over abortion.

Dr. Mila Means is a family practitioner in Wichita, and since last year she has been preparing to provide abortion services there. (She has been undergoing training with Kansas City abortion provider, Aid for Women.) But on Monday, a state judge issued a temporary restraining order barring Means from performing abortions at her medical office or making any changes to the facility that would allow her to do so. Judge Jeffrey Goering granted this order at the behest of Foliage Development, Inc., the owner of the building that houses Means’ office.

According to a lawsuit Foliage filed on January 28, Means requested permission from her landlord last fall to begin offering abortion services in her office later this year. The landlord turned her down, maintaining that it would violate her lease by “creating a clear nuisance to and disturbing the peaceful possession of all other tenants.” The landlord says that Means indicated that she would proceed with the plan anyway, which he claims would violate the terms of the lease.

The nuisance, however, would stem from protests the landlord anticipates—not from anything that Means would do. Anti-abortion activists from Operation Rescue, which is headquartered in Wichita, have already begun protesting outside her office. An event they held last December at the building attracted about 100 people, including counter-protesters. The landlord’s suit contends that once Means begins to offer abortion services, more protestors, demonstrators, and police will be drawn to the building. The suit notes that the Kansas Coalition for Life has threatened to hold daily protests outside Means’ office and that Operation Rescue has posted Means’ office address and contact information on its website.

According to the landlord’s complaint, the Kansas Coalition for Life has informed the landlord that “it will be a circus out there.” Already, the landlord says, three other businesses in the building have threatened to move because of the possibility of protests.

Wichita has long been an abortion-rights battleground. Operation Rescue relocated its headquarters there in 2002, taking over a building that had once housed Wichita Family Planning, to concentrate on its campaign against Tiller, a prominent provider of abortion services. On May 31, 2009, anti-abortion activist Scott Roeder assassinated Tiller while the doctor was serving as an usher at the Reformation Lutheran Church.

Means would be the first doctor to perform abortions in Wichita since the murder. But before she even could start, Operation Rescue made her a target, posting her photo and address online. “She’s taking the biggest burden,” says Jeff Peterson, the manager at Kansas City’s Aid for Women. His office is getting heat, too. “Local protesters are referring to us a jihadist training camp, saying that we need to be dealt with like jihadists in Iraq and Afghanistan, which is a little bit scary,” says Peterson.

Operation Rescue and its president, Troy Newman, have pledged to use all “peaceful and legal means” to keep Wichita “abortion free.” In a press release hailing the court’s temporary restraining order against Means, Operation Rescue touted the fact that Wichita “has been free from abortions since the closure” of Tiller’s office. Another anti-abortion outfit, Kansans for Life, has been sending out emails warning that a “grave evil threatens our community” and assailing Means for attempting to set up “a killing center” in Wichita.

Peterson says his organization agreed to train Means because of the need for abortion services in Wichita. “We’re doing this for George [Tiller],” Peterson notes. “I’m doing it for the patients. Troy Newman says nobody in Wichita wants this. Then why are people from Wichita coming up here [to Kansas City]? We’ve got a lot of Wichita patients coming here, having to drive three hours because there isn’t a doctor close to them.”

Means’ office declined to comment on the case, citing the ongoing legal process. Foliage Development, Inc. also declined to comment. But Foliage has asked the state court to permanently bar Means from performing abortions at the site. The court has ordered Means to appear at a February 15 hearing.

Kari Ann Rinker, state coordinator for the National Organization of Women and a Wichita resident, says the city had four abortion providers in the 1990s—until anti-abortion activists began waging fierce campaigns against each of them. Eventually, Tiller was the only remaining provider in town. Now the one doctor who wants to fill the vacancy his murder created is being thwarted—not because she’s creating a nuisance but because anti-abortion crusaders are.