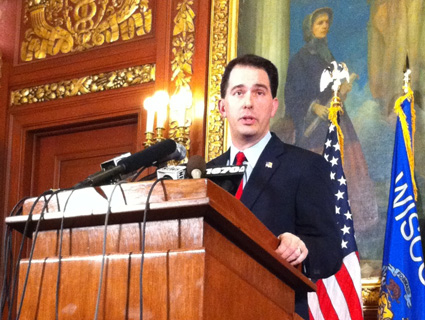 It took a sneak attack in the early morning hours on Friday for Republicans in the Wisconsin Assembly to pass Gov. Scott Walker’s controversial budget bill, the one that would eliminate collective bargaining rights for most public-sector unions. Assembly Democrats savaged their counterparts for ramming the bill through at just past 1 a.m., screaming “shame!” and branding them “cowards.” But if anyone asks Walker about the GOP’s late-night tactic, he’ll find himself in a tough spot: he’s blatantly flip-flopped on the issue throughout his career.

On the campaign trail in 2010, Walker, then a gubernatorial candidate, disavowed late-night votes by Wisconsin lawmakers. At the time, the Assembly was pulling all-nighters in order to finish its two-year legislative session, a common occurrence that’s angered government watchdogs who don’t approve of state business conducted when most people are asleep. In April 2010, Walker pledged to outlaw any votes in the legislature after 10 p.m. and before 9 a.m. “I have two teenagers and I tell them that nothing good happens after midnight. That’s even more true in politics,” he said in a statement. “The people of Wisconsin deserve to know what their elected leaders are voting on.”

A decade or so earlier, however, Walker took the exact opposite position. As an Assembly member representing Wauwatosa, a suburb of Milwaukee, Walker voted to eliminate an 8 p.m. legislative cutoff for the Assembly’s 1997 session, the Associated Press reported. He also opposed an amendment offered by Democrats to reinstate the 8 p.m. cutoff.