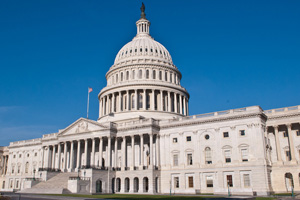 Citizens, stay vigilant! Troublemaking lawmakers are bro-ing out on Capitol Hill, turning their hallowed congressional offices into a frat house.

Or so alleges the watchdog group Citizens for Responsibility and Ethics in Washington, which has filed a complaint (PDF) listing 33 House members (all male) who may be violating tax laws by crashing in their offices at night. (After how many rounds of beer pong, the group doesn’t say.) “Some critics of the practice have charged that it makes the House feel like a macho boys’ club and promotes anti-Washington sentiment,” CREW reports.

The complaint accuses the non-inclusive list of 26 Republicans and seven Democrats of misusing official resources, or at least failing to alert the IRS about their shenanigans:

If parking is a taxable fringe benefit, then surely, so is lodging. Therefore, at the very least members of Congress who sleep in House office buildings should have the fair market value of their housing—anywhere from $1,500 to $2,000 a month—attributed to them as imputed taxable income.

What’s more, these entitled frat brothers have started whining about how noisy construction is keeping them from getting a good night’s rest!

But that’s not all. The complaint also contends that the rowdy reps have run afoul of House Rule 23, which mandates that members act “at all times in a manner that reflects creditably on the House.” By sleeping in their offices, the lawmakers are burdening the housekeeping staff—presumably by leaving empty beer cans and boxes of half-eaten pizza on the floor? And, they’re roaming the halls “in sweat clothes or robes in search of a shower.”

There’s no word yet on when the House members will tap their next keg, nor how compatible bro code is with House ethics rules. But if this turns into anything resembling the sleaze on C Street we’re bound to see more Chris Lee-style sextapades before long.