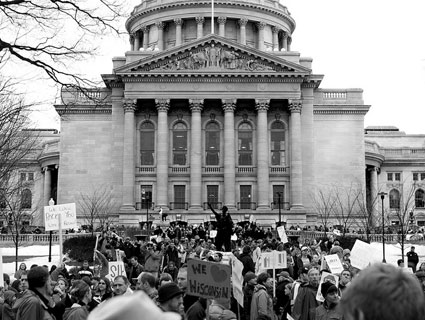 [UPDATE: Since I reported on Koch Industries PAC’s donations to Wisconsin Republican Governor Scott Walker, the New York Times and Washington Post both published their own stories the Kochs’ involvement. Both are worth reading. UPDATE 2: On February 22, an alt-news editor posing as David Koch called Walker’s office to talk about the union protests in Wisconsin. Walker answered, and the alt-weekly editor recorded the entire 20-minute conversation. My colleague Adam Weinstein has the story and the audio here: Did Scott Walker Get Crank-Call Pwned? (AUDIO) UPDATE: YES.]

Wisconsin Republican Governor Scott Walker, whose bill to kill collective bargaining rights for public-sector unions has caused an uproar among state employees, might not be where he is today without the Koch brothers. Charles and David Koch are conservative titans of industry who have infamously used their vast wealth to undermine President Obama and fight legislation they detest, such as the cap-and-trade climate bill, the health care reform act, and the economic stimulus package. For years, the billionaires have made extensive political donations to Republican candidates across the country and have provided millions of dollars to astroturf right-wing organizations. Koch Industries’ political action committee has doled out more than $2.6 million to candidates. And one prominent beneficiary of the Koch brothers’ largess is Scott Walker.

According to Wisconsin campaign finance filings, Walker’s gubernatorial campaign received $43,000 from the Koch Industries PAC during the 2010 election. That donation was his campaign’s second-highest, behind $43,125 in contributions from housing and realtor groups in Wisconsin. The Koch’s PAC also helped Walker via a familiar and much-used politicial maneuver designed to allow donors to skirt campaign finance limits. The PAC gave $1 million to the Republican Governors Association, which in turn spent $65,000 on independent expenditures to support Walker. The RGA also spent a whopping $3.4 million on TV ads and mailers attacking Walker’s opponent, Milwaukee Mayor Tom Barrett. Walker ended up beating Barrett by 5 points. The Koch money, no doubt, helped greatly.

The Kochs also assisted Walker’s current GOP allies in the fight against the public-sector unions. Last year, Republicans took control of the both houses of the Wisconsin state legislature, which has made Walker’s assault on these unions possible. And according to data from the Wisconsin Democracy Campaign, the Koch Industries PAC spent $6,500 in support of 16 Wisconsin Republican state legislative candidates, who each won his or her election.

Walker’s plan to eviscerate collective bargaining rights for public employees is right out of the Koch brothers’ playbook. Koch-backed groups like Americans for Prosperity, the Cato Institute, the Competitive Enterprise Institute, and the Reason Foundation have long taken a very antagonistic view toward public-sector unions. Several of these groups have urged the eradication of these unions. The Kochs also invited (PDF) Mark Mix, president of the National Right to Work Legal Defense Foundation, an anti-union outfit, to a June 2010 confab in Aspen, Colorado; Mix said in a recent interview that he supports Governor Walker’s collective-bargaining bill. In Wisconsin, this conservative, anti-union view is being placed into action by lawmakers in sync with the deep-pocketed donors who helped them obtain power. (Walker also opposes the state’s Clean Energy Job Act, which would compel the state to increase its use of alternative energy.) At this moment—even with the Wisconsin uprising unresolved—the Koch brothers’ investment in Walker appears to be paying off.