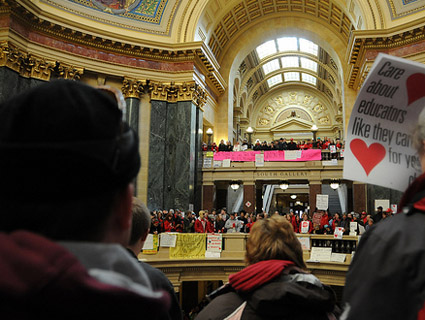 Inside the Wisconsin Capitol during this week's labor protests.<a href="http://www.flickr.com/photos/mrbula/5461332235/sizes/m/in/photostream/">mrbula</a>/Flickr

Today, the raucous labor protests here in Wisconsin will reach their ninth consecutive day. Tens of thousands of firefighters, cops, service employees, pipe fitters, teachers, students, teens, and kids have descended on the ornate Capitol building in frigid Madison. They’ve marched outside, signs held aloft; they’ve screamed and chanted and banged on drums and camped out overnight inside the rotunda. Throughout the ruckus, one question has loomed large: How will it all end?

So far, Republican Governor Scott Walker and the Republicans in the Wisconsin legislature refuse to budge on their “budget repair bill,” which would prohibit state employees’ unions from collective bargaining. Negotiation has been a non-starter. Which means the showdown’s endgame is anything but clear. Here’s a look at four potential outcomes and who wins and loses in each:

The state’s 14 Democratic state senators have been in hiding since last Thursday, preventing a vote on the budget bill. (There are 19 Republicans in the Wisconsin state Senate; the quorum for voting on financial bills is 20 members.) Gov. Walker and the Republican leadership in the legislature continue to rip into them for taking off, but their criticism hasn’t had any effect.

The Republicans, however, have a plan to lure their opponents back to Madison: They want to vote on a controversial voter ID bill opposed by the Democrats. The bill would force Wisconsin voters to show valid ID with a current address to be able to cast a vote. The problem for Democrats? Many young voters—a base of support for Democrats—don’t update their IDs when they go off to college or whenever they move.

Yesterday, a state Senate committee passed the bill over the objection of a single Democrat who had phoned into the session. Republicans can now try to take up the voter ID bill without any Democrats present because it’s not a finance-related bill, unlike the controversial budget bill. If they do that, they hope the missing Democrats will dash back to Madison to fight the voter ID bill and thus provide the Senate with a quorum to vote on the budget bill.

So far, the Democrats have yet to take the bait. It probably doesn’t hurt that they’ve raised $650,000 while in hiding, according to a source close to labor union leadership.

Outcome #2: Governor Walker and the Republicans ditch the collective-bargaining ban.

The governor has yet to give any sign that he’ll give in to the demands from organized labor that he scrap the budget bill’s ban on collective bargaining. But each additional day of protests and media coverage keeps Walker’s largely unpopular position in the limelight, putting pressure on him to make some kind of compromise. Indeed, Walker’s own approval rating in Wisconsin has dropped during the nine days of protests, according to Democratic pollster Stan Greenberg. (The conservative polling firm Rasmussen Reports found more support for Walker than for the teachers’ and public employees’ unions, though its poll has been criticized for potential bias.)

Adding to the pressure on Walker are statements from other Republican governors from economically distressed states who have endorsed the role of public-sector unions. Michigan Governor Rick Snyder told the Wall Street Journal he wouldn’t go “picking fights” with unions: “We’re going to go negotiate with our unions in a collective-bargaining fashion to achieve goals…It’s about getting people to come together and say here are the facts, here are the common-ground solutions.” Republican governors in Florida, Indiana, and Pennsylvania have also said they won’t go after unions, and will negotiate with them in good faith.

If more governors come out against attacking unions, and the protests keep up the momentum of the past few days, Walker might buckle.

Outcome #3: Walker and Senate Republicans could use a constitutional end-run to pass the budget repair bill.

Wisconsin’s 14 Democratic state senators fled the state knowing that the Republican colleagues they left behind couldn’t pass Walker’s budget bill without them. But there’s been rampant speculation in Madison that the Republicans could try a constitutional end-run that would allow them to kill collective bargaining without the Democrats being present.

It’s not entirely clear how this would work, but here’s the general idea: Walker and his staffers would strip the budget bill of any provisions that they claim aren’t related to state finances, potentially including the ban on collective bargaining. Those provisions would then be bundled into a new, ostensibly non-financial bill, which could then be voted on without the Democrats in attendance.

There are some problems with this approach. First, it would undoubtedly set up a legal battle over what is and isn’t “financial.” There’s an obvious argument to be made that collective bargaining is a financial issue. After all, Walker himself has said collective bargaining needs to be scrapped because of the financial burden it puts on state and local government. It would be incredibly difficult to pull off this option, says Robert Kraig, the director of Citizens Action of Wisconsin and an expert on state politics. But, he says, it’s not necessarily impossible.

Outcome #4: Walker could put off the final fight over collective bargaining until spring.

Walker’s budget repair bill concerns the current 2009-2011 state budget. If it passes, the collective-bargaining ban goes into effect immediately. But Walker could kick the can down the road by pulling out the collective bargaining language in the current budget bill and inserting it into the 2011-2013 budget, which he is due to announce next Tuesday.

This option would lead to a stalemate of sorts. Walker wouldn’t be admitting defeat, nor would he be ramming the bill through or trying a dubious constitutional Hail Mary. It could defuse the animosity in Madison, perhaps convincing the packs of protesters chanting “Recall Walker” and “Tell the Truth” to pack up and go home. Of course, it could also set up another confrontation with organized labor this spring, as the Wisconsin legislature debates Walker’s the 2011-2013 budget plan. Plus, the weather should be nicer then, making it easier for protesters to come out.

This wonky option hasn’t gotten much play so far in Madison, but no doubt Walker’s team knows it’s out there. Few beyond the governor’s inner circle and his Republican colleagues know what he’s thinking. Judging by his public statements, he has no interest in giving up the fight, either temporarily or permanently. Neither, for that matter, do the protesters. But with each passing day the pressure builds on Walker. It’s anyone’s guess how long he’ll hold up.