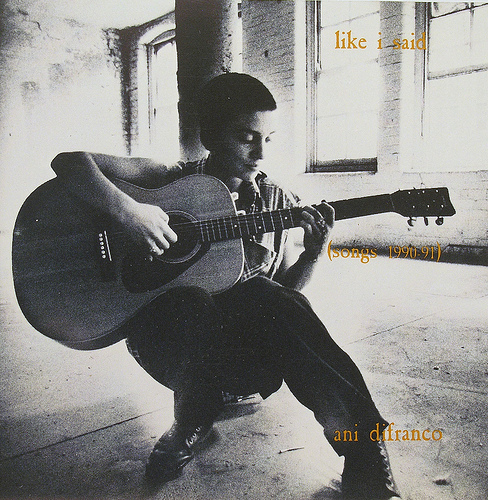 As my coworker, the whipsmart Emily Loftis, and I were discussing our mutual crush on Kaki King, she posed this question:

Can you do a post about gay language for straight girls? I’m always afraid I’m going to say something dumb considering that in my hometown “gay” is synonymous with really dumb. Grrr. I don’t have much of a measuring stick to work with. If you could include language that a well-intentioned bumpkin should avoid using, that’d be swell too.

PS: Is there a word for a girl-on-girl-crush, when the crusher is straight?

Thus inspiring me to create The Lezicon at After Ellen! A go-to guide for lesbian-related words, slang, and way too many puns.

Anna says: Great question! And thank you for asking. Some straight women think being a queer gal simply means that we have 38 ways to spell wimmin, but there’s so much more to it than that! Below, I present to you the following lezicon*, a queer dictionary of sorts, with relevant examples, celebrities, and everyday usages that you can use to impress your new queer friends at the next folk festival and/or Vagina Monologues production.

*Note of historical relevance: Gay terms obviously vary by time, region, and stereotypes. I can’t get them all, nor do I mean to offend anyone with generalizations. Tongue is firmly in cheek here, but I encourage you to add your own terms in the comments.

Androgyny: Generically speaking, someone who exhibits both masculine or feminine gender traits. Might also go by: gender fluid, genderqueer, or David Bowie.

Baby Dyke: A young lesbian, often fresh out of the closet, full of ideals and front row tickets to see Girlyman.

Beersexual: A gurl who will make out or sleep with another grrrl only while under the influence. Found often in reality television shows, in sororities, and in rare cases, Nick Lachey’s above-ground swimming pool.

Birkenstock-Blocking: When you are trying to hit on a wommon and another lesbian interferes.

Boi: Could mean any of the following, depending on context — a boyish lesbian, a soft butch (aka butch lite), a biological boy who hangs in queer circles, or a member of OutKast.

Read the rest of The Lezicon at After Ellen.