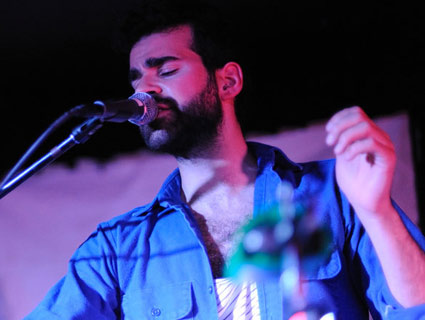 “What a cartographer does mapping out a place is what a musician does mapping out an emotion,” says Mike Deni, singer of San Francisco-based indie band Geographer. “When someone finds a new territory, they distill it into something transferable, something that people can understand, like a map. But that inevitably changes it, and there are good and bad things to that. That’s what the name Geographer is about; that process.”

The band—comprised of Deni, who also plays synths and guitar, cellist Nathan Blaz, and drummer Brian Ostreicher—has charted a steady course in the Bay Area music scene by bridging the gap between the often-impersonal space of electronica and the lush realm of emotionally charged melodies. By layering Deni’s mesmerizing falsetto over springy synths, pulsing drums, and the pull of an electric cello, Geographer produces hypnotic dance numbers that prove quite addictive. Since being named one of three “Undiscovered Bands You Need to Hear Now!” by Spin in 2008, Geographer has been gaining traction; its last show—during the Noise Pop Music Festival—sold out quickly.

I caught up with Deni just before his band’s departure to South by Southwest, and he sounded cheerful about the idea of performing far from his home turf. “We’re ready to conquer the world,” he joked, sheepishly adding, “but all in good time.” Not even a recent bicycle accident had weighed him down (“It was pretty intense, but honestly I got pretty lucky; wear your helmet!”), and he eagerly launched into a conversation about the thought process behind some of his catchy tunes.

Deni usually begins with the sound of a song before dreaming up the lyrics. “Most songs start with a motif, like just a riff or something, or a sound I really like,” he explains. “When I get the groove sounding as good as possible, and I have the vibe of the song, then I start to figure out what it’s about and start to fill in those gaps.

“I’m a strong believer of the subconscious,” he continues, “that’s where I get my favorite lyrics.”

Sure enough, the dreamlike quality of his singing can carry a listener beyond the bounds of normal thought and into the depths of uncharted memories. When his rich tracks reach their peak, the lyrics lose relevance, as if language no longer matters, and all that’s left is the core emotion, almost indescribable but certainly perceived. “The lyrics are very important to me, but I feel like that’s almost vanity because, honestly, people connect with the lyrics. But I think for the most part they respond to the music.”

Deni’s conflicted relationship with his prose can be seen in the Shakespeare-inspired song “Verona,” which begins: You tell me all the right words, but the right words sound so wrong. “When you enter into a relationship with somebody, you immediately start to define each other,” Deni vents. “Verona” emerged out of his frustration with “the uselessness of language,” and also from a close reading of the Bard. “My favorite idea from Romeo and Juliet had to do with how, outside the walls of Verona, there was no language,” he continues. “Romeo was using really poetic, Petrarchan language to describe Juliet, but every time he’s outside the walls of Verona, that stuff drops. So it’s like, you use language as a crutch and it becomes more important than the thing you’re defining.

“They probably don’t even love each other,” he scoffs of literature’s most clichéd lovebirds. “It’s just like they’re in love with the notion that they love each other.”

Even without his lexical struggles, Deni’s gorgeous voice would still distract me from listening to what exactly he’s singing. He says he’s known he wanted to be a professional singer ever since clinching the Aladdin solo in a fourth-grade rendition of “A Whole New World.” “After the concert,” Deni remembers fondly, “these two girls from the high school came up to me and they were like ‘Damn, boy, you can sing!’ And I was like, ‘Oooh, I guess I can.'”

That much of Deni’s songwriting inspiration has stemmed from grief—he abruptly lost his sister and father in 2005—may have prompted one YouTube commenter to write: “Everything? I have heard by Geographer haunts me.” Yet rather than send his listeners into melancholic states (á la Justin Vernon or Elliott Smith), Deni’s tracks possess a driving momentum, and his concerts have earned a reputation as “amazing” dance parties.

Geographer now is hard at work at its next album, which Deni says isn’t a huge departure from Animal Shapes (the last one), but it won’t be “a floor-to-floor dance album…We tried to make every note count in a way we didn’t necessarily do before,” he says, adding cryptically that the new songs deal with “the many myths we sort of buy into knowingly.”

When he’s not playing music, Deni does what you might expect of a Geograher: wander the hills of San Francisco to get lost in the city’s most remote corners. “I really like walking around, I don’t even know what neighborhood; it’s like between Glenn Park and Noe Valley and Diamond Heights. There are all these really weird streets that end in each other and all the hills are so steep, and you can really get tons of elevation, and you might wander onto dirt paths. That’s my favorite thing about it, when the city feels just bizarre and you’re in the middle of nowhere.”

Layered electronica, lush falsetto, and amped live shows; it’s no wonder San Franciscans have flocked to Geographer, and even likened Deni to another modern master, Thom Yorke of Radiohead. I asked him if that comparison was daunting. “It’s not daunting because it’s impossible,” Deni laughs, overwhelmed by the mere thought. But in his songwriting attitude, Deni does remind me a bit of the untouchable Radiohead. Both strive to make songwriting much more than the pairing of poetry and instruments, and to demonstrate that music has the potential to relay ideas more viscerally than language ever will.