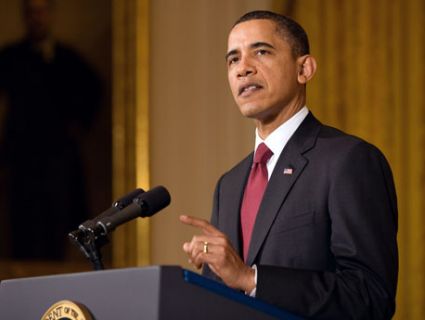 A ghost hung over President Barack Obama as he stood at a podium in the East Room of the White House on Friday afternoon to talk about Libya: the ghost of George W. Bush.

As Obama discussed the UN Security Council’s resolution authorizing the use of force, including a no-fly zone, to block Muammar Qaddafi from waging further war against the opposition, the president’s remarks about the Libyan autocrat echoed Bush’s comments about Saddam Hussein prior to the US invasion of Iraq—absent references to WMDs. Qaddafi, the president said, was engaged in “brutal suppression.” He has “demonstrated a willingness to use brute force” for decades. “Left unchecked, we have every reason to believe that Qaddafi would commit atrocities against his people.” He was thwarting the will of “the international community.” He had a stark choice: submit to the UN resolution or face a military response. “These terms are not negotiable.”

Threatening the use of force against a brutal tyrant, in the name of democracy and human rights, to advance US national security interests and cloaking it in the flag of the United Nations and regional stability—it does sound familiar. But Obama in the second half of his remarks departed from the Bush-like script:

In this effort, the United States is prepared to act as part of an international coalition. American leadership is essential, but that does not mean acting alone—it means shaping the conditions for the international community to act together.

That is, we’re not cowboys. This will be, Obama suggested, true multilateralism—one including Arab nations. His administration and the governments of France and Britain had quickly guided a forceful resolution through the Security Council (with China and Russia abstaining), and the United States, Obama noted, would be “enabling our European allies and Arab partners to effectively enforce a no-fly zone.” US leadership, yet European and Arab action.  He added, “The United States is not going to deploy ground troops into Libya.”

Noting that “our British and French allies, and members of the Arab League” will take a lead role in enforcing the resolution, Obama declared, “This is precisely how the international community should work, as more nations bear both the responsibility and the cost of enforcing international law.” That is precisely the opposite of how the neocons of the Bush-Cheney crowd viewed the world. They were not interested in tying their strategic desires to international law or in developing a global order in which the United States would not be the top-dog decider and enforcer.

Obama went further to distance himself from his predecessor:

I want to be clear: the change in the region will not and cannot be imposed by the United States or any foreign power; ultimately, it will be driven by the people of the Arab world. It is their right and their responsibility to determine their own destiny.

That was not the operating premise of the Iraq war.

Much still needs to be determined by Obama regarding the military actions the United States will take in this multilateral confrontation with Qaddafi—which may turn into his first non-inherited war. Can a no-fly zone work at this point? Is it possible to protect Libyan civilians from Qaddafi’s wrath—the raison d’être of the UN resolution—without placing boots on the ground? The challenge at hand may be more akin to Rwanda than Iraq. But that doesn’t make it easier or potentially less dangerous. And working with a true coalition—one that includes European and Arab partners each highly sensitive to their own interests—will be tough. (While Saudi fighter jets are patrolling the skies of Libya to protect pro-democracy Libyans, how will the Obama administration handle questions about the lack of democracy in Saudi Arabia?)

Yet the president, with this brief set of remarks, has crafted something of an Obama Doctrine for military intervention: The United States will join in a multilateral fight for democracy and humanitarian aims when it is in the nation’s interest and when the locals are involved and desire US participation. In short, the Anti-Bush Doctrine.