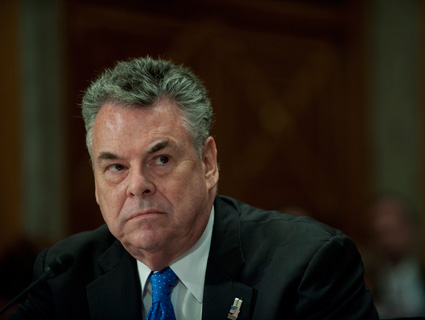 On Thursday, Rep. Peter King (R-N.Y.), the chairman of the House Committee on Homeland Security, will hold hearings on what he calls the “radicalization” of members of the American Muslim community. King, who has previously called for the New York Times to be tried for treason and for WikiLeaks to be listed as a terrorist organization, has never shied away from confronting terrorist threats wherever he sees them—but this time he’s struck a nerve. He’s been denounced by the ACLU and Democratic rivals—who have compared him to Joseph McCarthy. His own party, meanwhile, has been conspicuously silent. So who’s going to speak on Thursday? And what are they going to say? We’ve got you covered:

When: Thursday at 9:30 A.M. You can watch it live on C-Span, catch the webcast here, and follow my Twitter feed for live updates.

What’s the back story? When King announced the hearings last December, he explained that law enforcement officials “are constantly telling me how little cooperation they get from Muslim leaders.” King concedes that only a small fraction of American Muslims have ties to terrorism, but argues that those extremists have outsized influence, citing one figure that 80-percent of mosques in the United States are under the control of jihadists (that figure has been debunked). King believes “political correctness” is interfering with national security; as he explains it, the hearings are analogous to investigations into the Italian-American mafia.

Is there anything to that? Attorney General Eric Holder, the nation’s top law enforcement officer, has said the threat of homegrown terrorism “keeps me up at night,” citing, among others, Yemeni-American cleric Anwar al-Awlaki. In a speech last weekend, Deputy National Security Adviser Denis McDonough called combatting radicalization at home “part of our larger strategy to decisively defeat Al Qaeda.” Other American citizens who have been charged with planning or commmitting acts of terrorism include Maj. Nidal Hasan, the Fort Hood shooter, and failed Time Square bomber Faisal Shahzad. Law enforcement officials say Latino converts to Islam are increasingly vulnerable to radicalization.

But. But, critics of the hearings dispute King’s central premise—that American Muslims are complicit in the radicalization of a tiny minority. A February study by the Triangle Center on Terrorism and Homeland Security, for instance, reported that Muslim-American terrorist attacks had dropped significantly in the last year, and that 40-percent of all terrorism arrests came after a tip from the Muslim-American community.

Who Won’t Be There: Despite King’s insistence that Muslim community has been uncooperative on terrorism, the only law enforcement official he’s called to testify, Baca, has directly refuted that premise. And while Muslim community leaders have been a focal point of King’s criticism, just one of the witnesses, Bihi, seems likely to support his claims. King has been fiercely criticzed by far-right activists, meanwhile, for excluding self-styled anti-terror experts like Frank Gaffney, Robert Spencer, and Steve Emerson, who believe groups like CAIR are covertly working to undermine the United States. King had originally announced that Walid Phares, a counter-terrorism scholar and a Lebanese Christian, would testify, but rescinded the invitation because he thought it would distract from the focus on Muslims.

Does King’s past matter? The Long Island congressman, who once called himself the “Ollie North of Ireland” because of his prolific fundraising for the Irish Republican Army, insists that his own past radicalism isn’t relevant to the current proceedings. As we’ve reported, his activities in the 1980s on behalf of the IRA would probably constitute material support for terrorism under today’s laws, even though Irish Republicans never directly targeted Americans. If his witnesses move beyond domestic terrorism to larger questions of material support for groups like Hamas—the central criticism of CAIR—his own double-standard could become an issue.

Beyond King: The chairman understandably gets most of the attention, but the committee member most likely to show up in a Daily Show clip reel is probably Georgia Rep. Paul Broun, a GOPer who has previously warned that President Obama would impose a fascist dictatorship on the country. In 2009, Broun, along with three other GOP congressmen, suggested that members of CAIR had infiltrated Congress by posing as interns, and demanded that the House Sergeant of Arms investigate (he didn’t). Rep. Dan Lungren (R-Calif.) has also used CAIR as a bogeyman in the past—most recently, in his 2010 campaign against Democrat Ami Bera. Lungren targeted Bera for receiving a $250 donation from the director of the group’s Sacramento chapter, noting the previous terror ties of two ex-members.