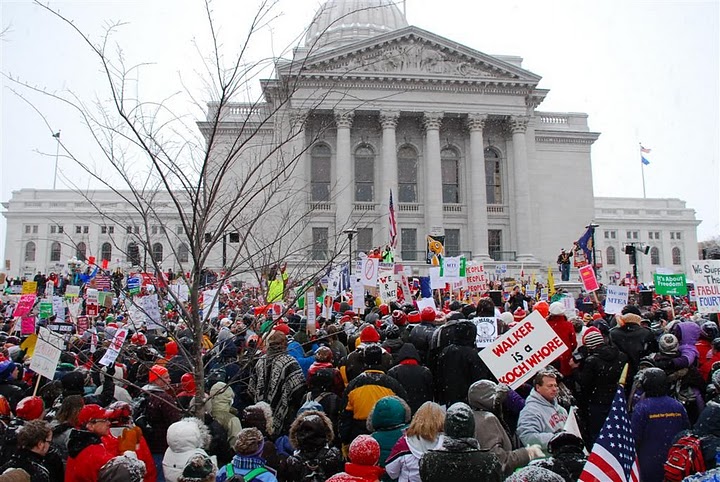 After a county judge ruled for the second time that Wisconsin’s controversial anti-union bill was not in fact law, Republican Governor Scott Walker and his administration agreed to suspend its implementation.

On March 18, Judge Maryann Sumi issued a temporary restraining order blocking the bill until a court decided if Republican legislators had violated a state open meetings law when they originally passed the measure. But the Walker administration went ahead with plans to enforce the law anyway, gearing up to start deducting more money from the paychecks of state workers mandated by the bill. The bill’s most controversial provisions, of course, ban collective bargaining rights on health care and pension benefits for most public-sector unions—provisions that have sparked nearly two months of protest in Madison, the state capital.

Early this morning, Judge Sumi clarified that the bill was not law and threatened to sanction on anyone who tried to enforce it. An official with the Walker administration announced soon after that “given the most recent court action we will suspend the implementation of [WI Act 10] at this time.”

Here’s more from the Associated Press:

Early Thursday morning Sumi added the non-effect declaration to her restraining order clarifying that the law has not been published and is therefore not in effect. She is expected to take more testimony at a hearing on Friday.

A spokesman for Republican Assembly Speaker Jeff Fitzgerald said he had nothing new to say beyond his previous statement that he didn’t believe the judge had the authority to interject herself into the affairs of the Legislature given the separation of powers.

A spokesman for Senate Majority Leader Scott Fitzgerald had no immediate comment.

The Legislature was scheduled to be in session Tuesday to pass other parts of Walker’s plan to balance the current year’s budget that faces a $137 million shortfall. There were no immediate plans to take up the collective bargaining piece again. The judge has said lawmakers could avoid the legal fight by passing it a second time, but legislative leaders have said they are confident it was done correctly the first time and it will prevail in court.