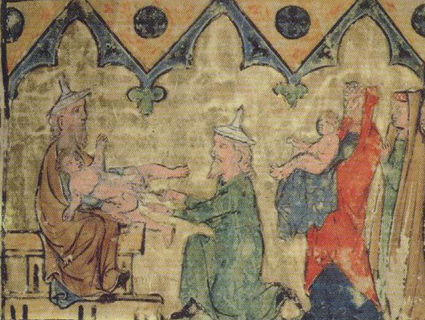 Thinking of running for president, but can’t find a copy of your long-form birth certificate? No problem, say Arizona GOPers. Just be prepared to provide a description of your penis.

The state’s birther bill, which had until recently been sidelined, cruised through the state Senate on a 20-to-9 party line vote Wednesday and was passed by the state House late Thursday. It’s now awaiting the signature of Arizona’s Republican Governor Jan Brewer. The bill, resurrected late last month with some minor changes, requires presidential candidates to provide a valid long-form birth certificate before they can appear on the ballot in Arizona. Because not all states even produce such records anymore, the bill allows prospective candidates to provide any two of the following documents in lieu of a long-form birth certificate: an “early census record,” a signed post-partum medical record, a hospital birth record (also known as a certificate of live birth), or a baptismal or circumcision certificate.

That’s right: Arizona Republicans want you to provide proof that you’ve been circumcised; it makes the “boxers and briefs” question look downright prudish. But a warning for overzealous candidates: As the Phoenix New Times helpfully notes, “Pulling out your penis in front of election officials, however, will not prove citizenship—and, in the worst case scenario, could get [you] labeled a sex offender.” Rules to live by.

As we first reported in January, Arizona’s bill was inspired by conservative activists who believe President Obama is not an American citizen by birth (for the millionth time: he is). To that end, potential GOP presidential candidate Donald Trump, who recently jumped on the birther bandwagon, called Arizona legislators this week  to voice his support for the measure, and invited the bill’s supporters to a meeting at his Manhattan office. More than a dozen states have now considered legislation to require presidential candidates to verify their citizenship, but Arizona’s bill is the first to clear a state legislature. If enacted, Democrats say the law would face a legal challenge.

Republicans talk a lot about the need to make tough, painful cuts. We just didn’t know this is what they had in mind.