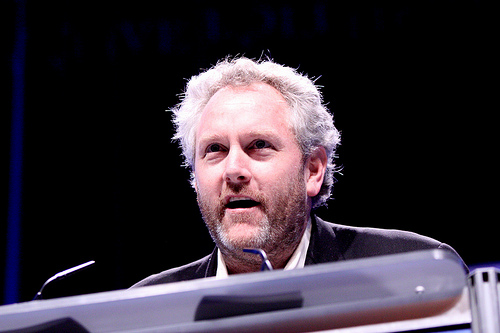 On Saturday, right-wing luminaries Sarah Palin and Andrew Breitbart headlined a rally in Madison, Wisconsin, attended by “hundreds” of tea partiers and conservatives that was billed as a push-back against the months of progressive, pro-labor demonstrations at Wisconsin’s State Capitol. Bundled up against the wind and snow, Palin defended Wisconsin Republican Governor Scott Walker and his anti-union legislation. “He’s trying to save your jobs and your pensions!” she said. “Your governor did the right thing and you won!”

But it was right-wing provocateur Andrew Breitbart, you could argue, who stole the show. At one point, Breitbart called the tea party “the most peaceful, law-abiding, clean-up-after-themselves group in the history of American protest,” a statement met with cheers from supporters and boos from the labor activists who’d surrounded the crowd of tea party faithful. Then Breitbart pointed to those labor folks and condemned them as uncivil, verbally abusive, and liars.

Because, of course, there’s nothing hypocritical about describing a movement as uncivil and then blithely telling it to go to hell.

Apart from the vitriol, Saturday’s rally made little splash on the national stage, unlike the massive pro-labor protests, attended by more than 100,000, which gripped the country for nearly a month this winter as unions and progressive groups defended the rights of public workers in the Badger State.

For the time being, the fight over the fate of public-sector unions in Wisconsin remains undecided. Walker’s anti-union “budget repair” is in legal limbo, after being successfully challenged by a county district attorney. The Wisconsin Supreme Court is expected to decide the bill’s fate in the coming weeks.