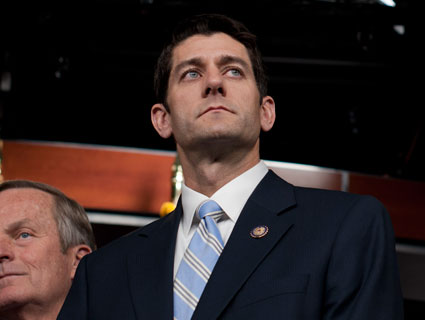 Google “Paul Ryan budget serious,” and you’ll be swamped with 22 million results. Add the word “adult,” and 239,000 results will appear. There’s been much musing within the politerati that the Wisconsin Republican’s proposed 2012 budget, which was released on Tuesday and would slash Medicaid and privatize Medicare, is not helpful for Republicans during the high-stakes showdown over spending cuts and a possible government shutdown. But within elite opinion, Rep. Ryan, the influential and wonky chairman of the House budget committee, has won perhaps the most vaunted accolade in Washington: “adult.”

Yet how courageous is it to whack poor folks and promote tax cuts that favor the wealthy? That’s the core of Ryan’s budget. Even deficit hawks like Bowles and Simpson recognize this. In the same statement touting Ryan’s endeavor, the two declare that Ryan’s plan

relies on much larger reductions in domestic discretionary spending than does the Commission proposal, while also calling for savings in some safety net programs—cuts which would place a disproportionately adverse effect on certain disadvantaged populations.

Here’s the bottom line: In conventional Washington, squeezing the poor, while boosting the rich, is not considered a nonstarter.

Ryan’s budget has received plenty of attention for the provisions that would turn Medicaid into a block grant program that would provide limited grants to states (thus ending any guarantee of coverage for the poor) and would transform Medicare into a privatized system controlled by insurance companies (thus ending any guarantee of coverage for the elderly). Less discussed—especially by Ryan!—is the part of his plan that would implement a massive regressive tax cut. As Jonathan Chait points out: “He cuts Medicare and other vital programs in order to finance a huge tax cut for people who don’t really need it. That’s the point Republicans don’t want to defend but should be forced to.”

Ryan contends that his proposed revisions to Medicare and Medicaid—that is, cuts—are necessary to save these critical programs. But these cuts and revisions are necessary to finance his major tax cut for the well-to-do. His plan, then, is intellectually dishonest at its core. Which doesn’t seem very adult.

The basics are not debatable. Kaiser Health News reports that “seniors and the disabled would pay sharply more for their Medicare coverage” under Ryan’s proposal. The Center on Budget and Policy Priorities notes that two-thirds of the $4.3 trillion cuts in Ryan’s plan come from low-income programs, while the Bush bonus tax cuts for high-income Americans are made permanent and estate taxes for the super-rich are ended. People with incomes over $1 million would be handed an average tax cut of $125,000 a year. As the CPBB observes,

Taken together, its proposals would produce the largest redistribution of income from the bottom to the top in modern U.S. history, while increasing poverty and inequality more than any measure in recent times and possibly in the nation’s history.

Ryan is indeed breaking new ground…in brazenness. He is boldly (bravely?) reinforcing the fundamental stereotype of Republicans: Screw the poor, aid the rich. This plan is a full embrace of his inner Republican. Though it may be politically gutsy to call for altering a popular program like Medicare, it is hardly courageous to mug the poor and the elderly to underwrite a tax bonanza for the wealthy. The hosannas Ryan is receiving reveal the perverted perspective of much of the political class. He has declared class warfare on the have-nots. And for that, he is admired.