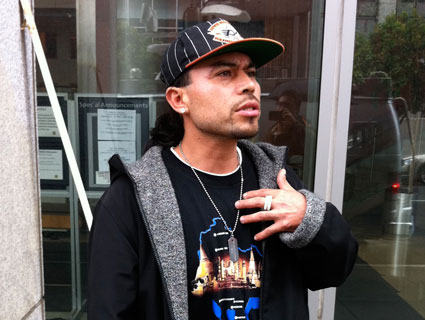 Jaime Aguilar, a Salvadoran immigrant going through deportation proceedings as a result of the Secure Communities program. Photo by Maddie Oatman

On February 13, Jaime Aguilar was standing at 16th and Mission streets in San Francisco when a police officer approached him for holding an open beer can. The officer asked him if he had a California ID, and when he replied that he didn’t (he’s an undocumented worker from El Salvador), he was arrested and taken to a nearby police station. He was then transferred to the police station on nearby Bryant Street, and within 13 hours, a man with a previously clean record—the father of two children—was wearing an ankle bracelet, about to be deported for drinking beer in public.

Aguilar, like hundreds of Californians, had been ensnared by a federal immigration program called “Secure Communities,” or S-Comm. While Immigration and Customs Enforcement (ICE) purported to target dangerous criminals when it began implementing the program a year and a half ago, recent data (PDF) reveal how the majority of those targeted in the state have committed minor crimes, such as traffic offenses, or no crimes at all. Because the program’s results have differed so markedly from its declared intentions, state lawmakers have been pushing to pass a bill that would allow counties to opt out of S-Comm.

AB1081, sponsored by state Assemblyman Tom Ammiano (D-San Francisco) and referred to as the TRUST Act, sailed through a Public Safety Committee hearing on Tuesday. If passed into law, it will require counties to officially agree to opt in to S-Comm. One of the biggest complaints about the enforcement program is that counties were never notified when S-Comm took root. Renee Saucedo, an organizer with the San Francisco advocacy center La Raza Centro Legal, remembers: “Jerry Brown went into agreement with ICE without any input from various counties. When we found out about it, people were already being reported and deported.”

When counties such as San Francisco and Santa Clara attempted to opt out of S-Comm, they were given mixed messages from ICE about whether that was even possible. “Immigration is lying to the citizens of California,” said  Kimberly Alvarenga, a spokesperson for Tom Ammiano, at a San Francisco press conference on Monday. “Now they are telling us it’s a mandatory program—what is the truth here?”

Last Friday, Rep. Zoe Lofgren (D-Calif.) said federal immigration officials should be investigated for deceiving local government and being intentionally unclear about the program. Recent correspondence obtained through a Freedom of Information Act request show that ICE knew the program was involuntary, yet was being intentionally vague about it (see my piece “Secure Governor, Insecure Communities” for more details). “You can’t have a government department essentially lying to local government and to members of Congress. That is not OK,” Lofgren told the Los Angeles Times.

One of the most vocal opponents of S-Comm is San Francisco Sheriff Michael Hennessey, who criticizes ICE for wavering on whether or not communities could opt out of S-Comm. “San Francisco has attempted to opt out for the past year,” he told the crowd at Tuesday’s hearing. “We were told initially we could opt out, then we couldn’t, then we could… it’s gone back and forth like a ping-pong ball for the last seven or eight months.”

Another criticism of S-Comm is that it puts victims and witnesses of crime at risk for deportation, which could lead to less collaboration between immigrant communities and local police. In one of the most disturbing examples of the program’s repercussions, an undocumented mother suffering from domestic abuse might have to enter deportation proceedings after she finally called the cops on her abuser and her fingerprints were then passed from the local jail to federal immigration officials. On top of being a victim of battery, she would have to wear an ankle bracelet and worry she would soon be separated from her three-year-old son.

“More than 50 percent of the San Francisco community is of Asian or Latino descent,” Hennessey said. “There’s a great deal of mistrust in our citizens about ICE and the deportation process. S-Comm sweeps up virtually anybody: anyone who steps up as a witness to a crime, anyone who steps up as a victim of a crime risks having their fingerprints passed on to federal authorities.”

Claudia Reyes, of Mujeres Unidas y Activas, says that the women who come to her organization this year have grown more fearful of relaying information to police out of fear of deportation. To try and remedy some of these concerns, the TRUST Act requires that local law enforcement “shall not share the fingerprints of domestic violence victims with Immigration and Customs Enforcement officials.”

Critics of Ammiano’s bill include members of the California State Sheriff’s Association, whose representative, Curtis Hill, told Tuesday’s hearing audience that S-Comm alleviated financial stress on sheriff’s offices around the state.”Prior to S-Comm, agencies ran manual reports, which put burdens on clerical staff,” Hill stated. “Now, sheriffs fingerprint everyone, and we feel this protects us from racial profiling allegations and removes burden on clerical services.” Hill was the only opponent to speak at the Public Safety Committee Hearing, and Ammiano has promised to work with the Sheriff’s Association in order to try and reconcile its concerns with the bill.

There’s still looming uncertainty as to whether federal immigration will allow the opt-out bill to survive. “Where immigration is concerned, the federal government sets the policy,” Homeland Security Director Janet Napolitano told the San Francisco Chronicle on Monday. But Quintin Mecke, a spokesman for Ammiano, argues that so far the federal government has not been very upfront about its position in local immigration enforcement. “In pushing for this bill, we are at least trying to clarify the relationship of what is happening and what everyone’s role is,” he says. Washington state and the District of Columbia have been successful in turning their backs on S-Comm, and legislation similar to Ammiano’s is pending in Illinois.

As for Jaime Aguilar, the guy being deported for enjoying a cerveza in the Mission, he remains frustrated by treatment of undocumented immigrants in California. “I paint the gringos’ houses and now they’re kicking me out,” he scoffed. “It’s a shame; we’ve made a big contribution to this country.”

As I spoke to him outside the San Francisco State University building on Monday morning, Aguilar began directing his anger toward someone who desperately needs Latino support during the next couple of years. “It’s all Obama,” Aguilar contended. “Since he took power, so many more people are getting deported. He promised us change, and instead all I get is this,” he said in disgust, pointing to the black tracking device clasped around his ankle.