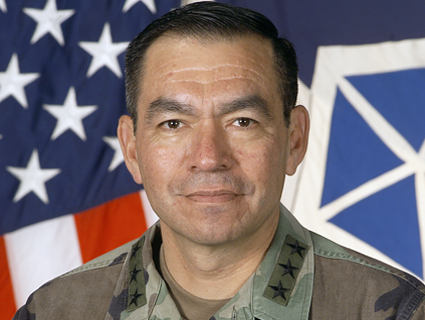 The Democrats think they’re within striking distance of a Republican-held Senate seat in Texas, and they think they’ve found their man: retired Lt. General Ricardo Sanchez, a cantankerous San Antonian who oversaw the Iraq War effort in 2003 and 2004. “It’s the one candidate that will cause John Cornyn some heartburn,” a Dem state politico told McClatchy last week.

But Sanchez comes with obvious baggage, and Wired‘s Danger Room marshaled the opposition research today, calling Sanchez a “disgraced three-star” and launching into quite the denunciation:

Congratulations, Texas Democratic Party: you are on the verge of a new level in cynicism. Sanchez’s tenure running the Iraq war saw a humiliated and cashiered Iraqi military metastasize into an insurgency that killed and maimed thousands of Americans and hundreds of thousands of Iraqis. Under pressure from the Pentagon, he approved abusive detention and interrogation practices for Abu Ghraib that resulted in the U.S.’ most damaging wartime scandal since Vietnam. What could possibly interrupt Sanchez’s deserved fade into obscurity? “He’s the one guy who could unite the Hispanic vote,” former Texas Lieutenant Governor Ben Barnes told McClatchy. “He’ll get the conservative Hispanic businessman.” Amazing…

It’s absolutely true that Sanchez was made one of a small number of high-ranking fall guys for Abu Ghraib. But that was hardly an entirely fair outcome, considering the Pentagon (and White House) torture pressure Wired cites. And let’s not even get started on the fortunes of the White House guys who actually explicitly sanctioned torture in Abu Ghraib and elsewhere, like Cal-Berkeley law professor and perennial op-ed waterboarding apologist John Yoo.

It is fair to say that Sanchez was an uninspiring strategist when it came to pacifying Iraq at a critical juncture. But look at what he was handed: a politically cooked-up war (PDF) that was unpopular with everybody but the US electorate at the outset; a crappy battle plan from Gen. Tommy Franks that lacked any semblance of caring what happened in Iraq once the tanks arrived in Baghdad’s Firdos Square; a Coalition Provisional Authority run by a blue-blazered country-club Republican who could write a book on how to create a violent failed state; and an Army that needed substandard reservists and guardsmen to handle an ever-growing number of prisoners…prisoners from which the runaway executive branch hoped to extract some kind of politically salient intelligence. None of this really changed until after the 2004 presidential election, when Iraq violence was still rising, domestic patience over the war was thinning, and even a recalcitrant Bush administration had to admit that shit was bananas. If you tell me a Casey or a Petraeus could have made lemonade out of this sour citrus mash in 2003, I’d be inclined to call a medic over to your side to check your vitals.

But that’s partly the point here: Sanchez is no Petraeus, not simply in terms of military effectiveness but in terms of being able to manipulate politics and public perception to turn even your losses into wins. Does that, in itself, make him a dicey choice to be a national politician? Perhaps. But, hey, we’ve had good generals turn out to be godawful cabinet secretaries. We’ve seen “good” generals go off on their civilian overseers, retire, and end up teaching at Yale. And more recently, we’ve seen prisoner-torturing Islamophobic battalion officers become congressmen. To say that Sanchez is fit for office is debatable. To say that the American people are represented by worse veterans now is not.