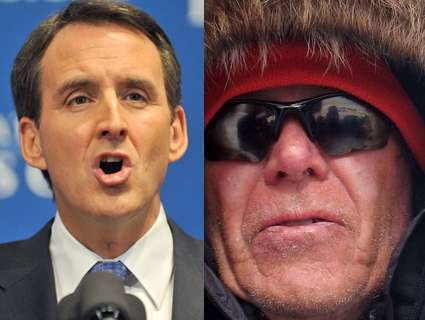 When Will Steger was 15 years old, he and his brother piloted an old motorboat down the Mississippi River from Minnesota to New Orleans. At 17, he journeyed to the Arctic. At 41, he became the first man in history to travel unsupported to the North Pole and come back alive. He’s traveled across Antarctica by sled (another first), hopped freights, and found his purpose at a mountain monastery.

After working closely with Steger for two years to combat climate change, the former Minnesota governor and current GOP presidential contender abruptly reversed himself on the issue in 2008, just as his name was being floated as a possible presidential running mate for Sen. John McCain (R-Ariz.). Steger and Pawlenty haven’t spoken since. Today, the politician who once cut a radio ad with Janet Napolitano calling for a federal cap on greenhouse gas emissions calls his work on climate change “stupid” and says the science is uncertain at best.

“I’m baffled by that—did he actually say that?” says Steger, when asked about Pawlenty’s recent statements. “I’m baffled by that. But I think he’s getting information from the wrong source and it’s really too bad for our children. It’s reckless.”

After years of chasing records—dogsledding across Greenland, attempting a solo canoe trip from the North Pole to Canada—and raising awareness on environmental issues, Steger began narrowing his focus to global warming in 2006. He was witnessing firsthand the effect of global warming on the frozen north: Ice shelves began breaking apart; spring—such as it was—would come in May, not July, and last longer; the trans-Arctic sled routes that made him famous became impassible due to open water. Through the Will Steger Foundation, he began shifting the focus of his work from exploration to preservation.

Similar to Al Gore’s An Inconvenient Truth, Steger put together his own Powerpoint presentation documenting his experiences, then began appearing at schools, churches, and business groups across the state to pitch his message. He’d usually bring along a climate scientist for good measure—lure them in with the sled dogs, the thinking went, and they’ll stick around for the policy. And in the conservative governor of his home state, he found a willing ally.

Steger requested a meeting in 2006, and the governor obliged.

“It was a real heart to heart,” he recalls. “I really believed that morally we were on the same level. We saw the moral imperative. And he understood, and back then, he chose to veer in another direction [from his party], which took a lot of guts. I have to respect that.”

The two began touring the state together, appearing at a forum in Duluth—where they discussed what global warming would mean for Lake Superior—and the Twin Cities. In interviews, Pawlenty referred to their alliance as the “odd couple,” and compared his new partner to Paul Revere, for his role in sounding the alarm on the threat of climate change. He acknowledged that not everyone in his party was happy with his position, but that was the point: He and Steger, he said, were going to “convince the skeptics.”

In January 2008, the governor had lunch with Steger at his cabin in Ely, a small town of about 3,500 that serves as a gateway to the remote Boundary Waters wilderness. Joined by Democratic Sen. Amy Klobuchar, they held a community forum that afternoon on climate change, in an area that had long been divided between environmentalists and loggers.

That spring, Steger invited Pawlenty to join him on an expedition to the Arctic. The plan was for the governor to meet Steger at Ellesmere Island, a frozen expanse in Canada’s far north that has served as a springboard for Arctic expeditions. Steger was launching a major two-month expedition to study the effects of climate change on Ellesmere; Pawlenty would only stay for a few days. Steger had previously brought British billionaire and Virgin Group founder Richard Branson to Baffin Island, and taken future Minnesota governor Mark Dayton along for a trip to the Arctic National Wildlife Refuge.*

“I wanted to show him the Arctic firsthand,” he says. “I wish I could have done that, because when you see that area—it’s one thing talking about it and seeing slides and pictures, but when you’re there it makes a real impression on your mind. Once you see an area like that, you really almost have to stand up for that.”

But after serious discussions, the plan fell through (Steger’s expedition continued as scheduled). Part of the problem was just bad timing—the legislative session was finishing up—but there may have been another factor at work: Pawlenty was beginning to make a name for himself as a rising GOP star, and with the presidential election shifting into full gear, the second spot on the ticket seemed like a real possibility.

The governor backed out of the trip and then skipped his final scheduled forum with Steger. Later, he ignored the recommendations produced by the Minnesota Climate Change Advisory Group (of which Steger was a member) that he had convened with much fanfare just a little more than a year earlier. And he began using global warming as a punch line, not a talking point.

Pawlenty’s split with Steger—and climate change 180—was striking. When the Republican National Convention came to St. Paul in September 2008, Pawlenty played the role of host to a convention dominated by chants of “Drill, Baby, Drill!” Steger spoke at a protest rally a few blocks away, sharing the stage with the punk-rock group Anti-Flag.

Steger says he has no hard feelings toward Pawlenty, whom he calls “a friend.” But they haven’t spoken since the Ellesmere expedition, and in an interview with Mother Jones, he used the word “baffled” repeatedly to describe his reaction to the governor’s new dogma. (Pawlenty, contacted via his political action committee, did not respond to a request for comment.)

“A lot of environmentalists think I want to dump on the governor because he changed around,” Steger says. “No, I respect the governor and I’m thankful that he did what he did do. It’s too bad that he couldn’t carry the flag, but in that party, you don’t carry that flag.”

Like Mitt Romney’s effort to reform Massachusetts’ health care system, Pawlenty’s global warming initiative is now anathema to the GOP base. With Steger’s support, Pawlenty signed into law a bill that would force the state to cut greenhouse gas emissions by 80 percent by 2050. But that won’t do him much good in the GOP primary: According to a recent survey, only 29 percent of Republicans believe man-made global warming is happening.

“It’s misguided; I made the mistake,” Pawlenty said on Laura Ingraham’s radio show last week, addressing his past support for climate change legislation. “The question is, once you made a mistake, do you recognize it? Do you admit it? Are you willing to come forward? Are you a big enough person to say it was the wrong thing to do?”

Steger, for one, is optimistic that the answer to that question is “yes.”

“Who knows? This thing could change—what would five dollars or six dollars a gallon do?” he asks. “On expeditions, I always sought out that edge where you have to be right on guard, where you have to be at your best. That’s where the real learning is. We’re on the edge right now. We’re not being idealists; we’re against the wall.”