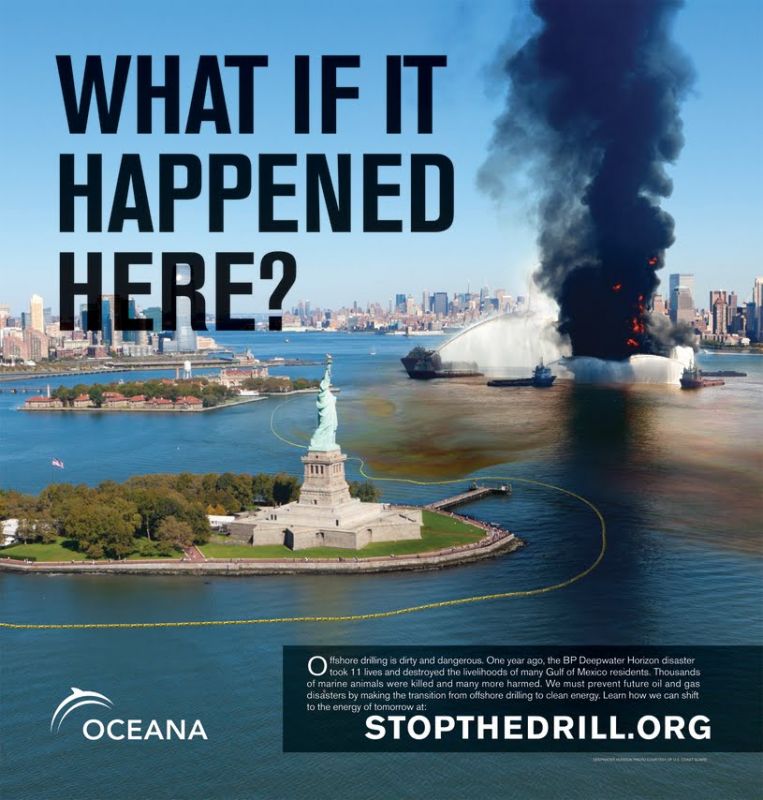 With the anniversary of the BP oil disaster next week, the environmental group Oceana is running an ad campaign in the Washington, DC metro system asking the question: What if the spill happened here and not somewhere down in the Gulf?

The ads superimpose the image of the exploding, leaking well in photos of cities like Washington, New York, and San Francisco. “We’re trying to get the message out: oil is dirty and dangerous,” says Jackie Savitz, director of pollution campaigns at Oceana. “How would we feel if it happened in our backyard?”

If you’ve been in the DC metro system lately, you’ve probably seen a whole lot of ads from the oil and gas industry talking up how they’re just a bunch of friendly folks who operate cleanly and safely. They’ve basically plastered the entire metro station over by the Capitol, so it’s nice to see a reality check, even though it’s on a much smaller scale. Congress has done absolutely nothing in the last year to avert future potential oil disasters. The campaign is a good reminder that the oil spill was devastating for Gulf coast residents even if the rest of the country seems to have forgotten it happened.

But a wannabe James O’Keefe has gone after the ads and Oceana, claiming that they look too much like 9/11 to be permissible. You know, because you can’t use the image of New York City now (unless of course you’re a conservative organization; then it’s fine). The right-wing group Accuracy in Media deployed their reporter Benjamin Johnson to stand outside the metro to try to provoke some outrage among riders for their video about why New York shouldn’t be used to promote an “anti-drilling leftist agenda.” Most of them appear to be confused about why he’s trying to force them to make that connection. Then he tries a (failed) sting operation at Oceana complete with a hidden camera to force those awful environmentalists to admit that yes, they do hate America. Watch the attempted smear here, or below: