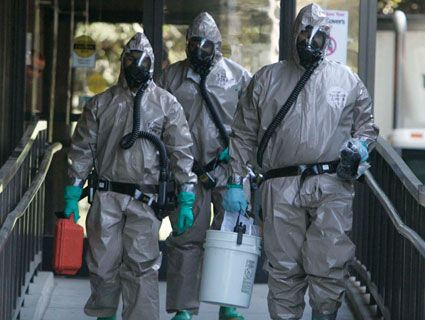 Does an Al Qaeda anthrax operative own four pharmacies in New York City?

That frightening possibility is raised in one of the 700-plus Guantanamo detainee assessments released recently by WikiLeaks and other sources.

The documents detail the history and threat potential of terrorist suspects detained at Gitmo. Recently, a blogger sent me an email pointing out that one of these assessments contains a particularly chilling section. It says that a detainee captured by the CIA in 2003 possessed a diary that contained contact information for a “possible al-Qaida anthrax operative” who then was living in New York City and who owned several pharmarcies there. The assessment provides the name of this suspect—a businessman of Pakistani origin—but I’m not going to identify him because he could not be reached for comment and this information could be wrong.

That makes this story a vexing tale: government information (once secret, yet now publicly available) indicates that a suspected terrorist is running drug stores in New York, but it’s impossible to tell whether this information is solid, or whether an innocent man has been mistakenly incriminated.

The report, written in 2008, notes that the suspected terrorist/pharmacist’s name appeared in a document found at an Al Qaeda safe house in Pakistan juxtaposed with a reference to an anthrax vaccine. The report does not detail this reference or describe the document. The detainee assessment also reports that information linking the suspected operative to anthrax and biological weapons was found on a calendar belonging to yet another suspected terrorist, but it does not specify the nature of this information.

The report maintains that the detainee, who decades ago lived in the same Pakistani village as the suspect, fingered his old friend as a member of a pro-Taliban group that operates in Afghanistan and Pakistan and that is considered a terrorist organization by the United States. The assessment also notes that, according to the detainee, this alleged Al Qaeda member owns pharmacies in New York City.

The intelligence referenced in the detainee report could be legit—or iffy. But, if true, an Al Qaeda op who runs drug stores in an American city could pose a serious national security threat. At the least, this businessman could provide other Al Qaeda operatives with medications that could be of use to those handling anthrax or other biological agents. But the report doesn’t indicate whether US law enforcement or intelligence agencies have taken any steps regarding the pharmacist.

An online search of his name turns up at least four pharmacies in the New York area for which he is listed as an owner. I called one and asked for him. I reached a man who identified himself as this suspect’s brother. He told me the suspect does not live in New York and pressed me on why I was inquiring about him. I said that his brother had been referenced in a government report concerning a Gitmo detainee, and I garbled the detainee’s name. The brother put down the phone and in a different language spoke to someone nearby, repeatedly mentioning the name of the Gitmo detainee, as if both people in the conversation were already familiar with him. He returned to the phone and told me his brother now lives in Pakistan. I asked if he had a phone number for his brother. No, he said. Email? I asked. No. But he added that he would transmit a message from me to his brother. I left my number, and he ended the conversation.

I called back and tried the brother again, noting that I was attempting to resolve a serious matter, explaining that his brother had been described in this document as an Al Qaeda suspect involved with anthrax. “I don’t want to listen to you,” he said, growing agitated. “I don’t want to talk to you… You can say anything. I cannot talk about this. God knows what?” I replied that other reporters might come across this information and contact him. “We have lawyers,” he said, then hung up.

I called another drug store apparently owned by the suspected terrorist. An employee there told me this pharmacy was managed by the businessman’s son and that the suspect has been in Pakistan for at least two years. The employee did not have a phone number or email address for him. “I think he’s sick and can’t take calls,” he said. He promised to pass my name and number to the son. I never heard back. When I later called for the son, I was told by another employee that he would not be available for days.

So this much of the detainee report was confirmed: the man currently does own at least four pharmacies in New York City. He also seems to have an herbal remedies store in Karachi. Reached in Karachi, a woman who identified herself as his wife (but who would not provide her name) said that he was not available but could be reached the following day. She also said that he had never been contacted by US authorities. Subsequent attempts to reach him at this number—before and after the US raid that resulted in Osama bin Laden’s death—were unsuccessful. No one ever picked up the phone, and there was no voice mail.

Mother Jones contacted the FBI in Washington and New York and asked for information regarding this suspect. After all, wouldn’t the bureau have thoroughly run down such a lead? Each office said that the FBI would not comment on information in a leaked document.

Here’s the dilemma. Either the information regarding this suspect is accurate or not. If it is, an Al Qaeda operative linked to biological and chemical weapons owns pharmacies in New York, giving him access to a variety of controlled substances that could be of use to terrorists. Though the US intelligence community possessed information about his Al Qaeda links at least three years ago, he’s still running drug stores in a city that is a magnet for Al Qaeda attacks and which is now on high alert following Bin Laden’s death. Alternately, if the information in this now-public document is incorrect, an innocent Pakistani businessman can easily be branded a terrorist, his life and businesses ruined, his family harmed, and his own safety jeopardized.

With the document now in the open—and on the Internet—the public has a right to know whether this potentially dangerous matter has been resolved. (And, if turns out the intel is faulty, the Pakistani businessman deserves to have his name cleared.) The FBI has the usual bureaucratic reasons for not commenting; it does not want to legitimize leaks. But alarming information of this sort does warrant a response. The critical issue is not the leak, but the nightmarish possibility of an anthrax operative on the loose.

Research assistance for this story was provided by Ron Brynaert.