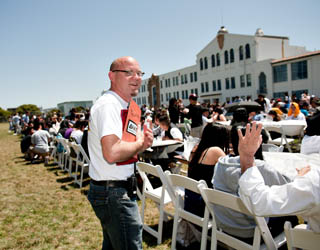 Principal Eric Guthertz at a recent Mission High outdoor festival. Photo: Winni WintermeyerMission High School was honored among the top 7 percent of all US high schools on Washington Post‘s annual rankings list, published today. Only five schools in San Francisco  made this national list of 1,900 schools, and among the five schools, Mission High educates the highest number (by far) of Latino, African American, low-income, and English-learning students. The Post‘s veteran education journalist and columnist, Jay Mathews, described the newspaper’s methodology for their rankings this way:

“We take the total number of Advanced Placement, International Baccalaureate and Advanced International Certificate of Education tests given at a school each year and divide by the number of seniors who graduated in May or June. … But this year only 7 percent of the approximately 27,000 U.S. public high schools managed to reach that standard and be placed on our list.”

Why is the Post using this formula? Mathews explains:

“My method differs from how high schools are usually rated. Some lists use average SAT or ACT scores, state test scores or the percentage of graduates who go to four-year colleges. Those results are often so influenced by family income that you could get similar rankings by averaging the square footage of the students’ homes. Many principals and teachers have told me they prefer a measure such as mine that puts weight on efforts of school staffs to prepare students for college. They say that shows the quality of the school rather than the economic status of the parents and gives schools full of impoverished students a rare opportunity to shine.”

Yesterday I wrote about why students and teachers at Mission High feel that the state and federal “scales” for measuring the quality of schools are broken. According to current state and federal measures, Mission High ranks at the bottom five percent of all schools in the nation. “We send more African-American students to college than most schools in the district. Our student and parent satisfaction surveys are very high. Why isn’t that considered?” Principal Guthertz wondered out loud. Looks like the Washington Post agrees. Maybe federal and state lawmakers will too, as they attempt to improve the current scales of the No Child Left Behind Act.