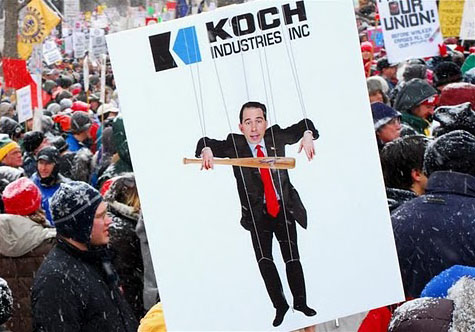 A sign at a pro-labor rally outside the Wisconsin Capitol in February.John Murray/johnmurrayphoto.com

Believe it or not, David Koch, the billionaire donor to right-wing think tanks and political advocacy groups, and liberals have something in common: They both see Donald Trump’s presidential bid as a PR stunt by a man who’s not suited to run the country.

Koch, dubbed by some as the “tea party’s wallet,” had some less-than-flattering words for Trump in an interview with New York Daily News earlier this week. Koch described Trump’s political positions over the past decade as “highly variable and unusual,” adding, “He’s a wonderful guy, but I don’t think he should run for office.” Koch went on to say, “At some point, I think he’s going to drop out of the race when he realizes that he’s really not qualified to be president.” Ouch.

Koch also dealt a blow to 2012 frontrunner Mitt Romney, who counted Koch as a supporter in the 2008 race. At this point in the 2012 race, Koch told the Daily News he hasn’t settled on a candidate yet, despite the fact that Koch hosted a major shindig for Romney last summer in the Hamptons and multiple Romney staffers insisting that Koch remains a Mitt supporter.

The potential loss of Koch as a backer comes amidst the news that a key Romney campaign chairman from 2008 cut ties with Romney. As I reported on Wednesday, Bruce Keough, the chair of Rommey’s New Hampshire campaign in 2008, declined to sign on for 2012, citing the candidate’s ever-changing political identity. Romney, Keough says, “manages to say things that cause people to think, ‘Wait a second: I thought I knew him, and now I’m not so sure.'” As for the impact of Keough’s departure, one veteran New Hampshire political analyst said, “If somebody like Keough said that to the campaign, it’s going to be very interesting to see how that plays out up here.”