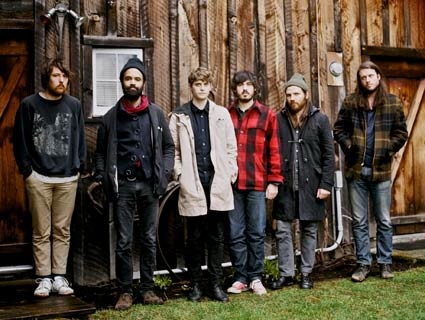 There’s a moment towards the end of Fleet Foxes’ new album Helplessness Blues, during the song “The Shrine/An Argument,” where front man Robin Pecknold’s voice cracks in desperation. The fissure may be the emotional nadir of the record’s narrative, but it sends ripples down my spine—it’s probably been the highlight of my listening experience lately. For the first time, Pecknold dares to waver from his flawless vocal prowess, hinting at a darkness his listeners have rarely experienced from the angelic singer.

Helplessness Blues is not a huge departure from Fleet Foxes, the band’s first CD, but it possesses more moments of frustration and despair. By allowing these feelings to creep in, Fleet Foxes have created a more complicated and ambitious repertoire, strengthening their overall reach.

The band played all 20 songs from its cache at Oakland’s Fox Theatre last Thursday night. Though Fleet Foxes’ romantically ragged appearances and pastoral lyrics make them better suited to perform in a redwood grove than an indoor venue, the Fox’s vacuous depths and grand splendor allowed for rich listening. The place was packed, hundreds of bearded, plaid-clad fans huddled around the railings, waiting for a bit of magic. Massive gold statues of seated Aztec Gods lorded over the crowd. Lights dimmed and the world went violet. Fleet Foxes took the stage and played a seamless set, blending flutes, mandolins, guitars, and keys and highlighting their most precious entity: six wonderful voices.

In their earlier album, most songs showcased these voices woven together into precise harmonies. Stories of revelry characterize this album for me; in “White Winter Hymnal,” for instance, the scene takes the form of a fairytale: “And scarves of red tied round their throats, to keep their little heads, from fallin in the snow, and I turn round and there you go.” Innocence sparkles the narrative.

Helplessness Blues maintains those immaculate harmonies, but Pecknold’s bare solo voice shows through more frequently. The pureness of earlier work has been pierced, leaving a narrator who is more vulnerable, betrayed, or, as the title suggests, helpless. In “The Shrine/An Argument,” the narrator mourns the loss of a lover: “In the driveway pulling away putting on your coat / In the ocean washing off my name from your throat.” Towards the end of the tune, an angsty bass clarinet* goes wild during a captivating improvisation.

It’s hard not to associate this with Pecknold’s autobiography; his romantic relationship unraveled as the album came to fruition. It’s also been widely reported that the band had trouble mixing the CD, and they rerecorded most of the songs at one point. But if they struggled while casting the album, maybe it turned out for the best in the end. In Helplessness Blues, they embark on a dreamy, distraught adventure, one mired by shadows where once all was light. The contrast allows for a more fleshed-out live performance—with more instrumental variety and still plenty of room for pitch-perfect vocal tapestries.

*An earlier version of this post incorrectly stated that the instrument was a saxophone.