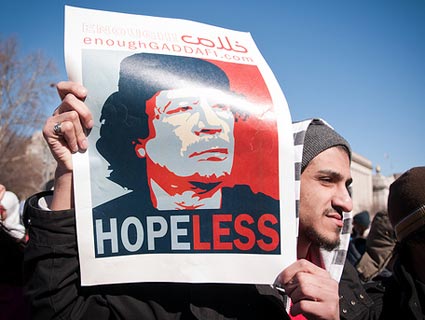 Last Wednesday, Luis Moreno Ocampo, the chief prosecutor of the International Criminal Court, told the UN Security Council that the results of the investigation he’d requested into Libya were in: Members of the Qaddafi government had allegedly perpetrated crimes against humanity. Further, he said he was going to request three arrest warrants from the court. For whom, he wouldn’t say. Even when I asked him after he’d had a Bellini at the end of that long day.

Last night, Al Arabiya reported that two of the three warrants would be for Muammar Qaddafi and his son Saif. If true, this wouldn’t be the first time the ICC has issued an arrest warrant for a head of state. Sudanese president Omar al-Bashir was slapped with one in 2009 for war crimes and crimes against humanity, and got another for genocide last year. Those warrants led Bashir to throw a bunch of aid workers out of his country, and isolated him from some parts of the international community. (Shortly after the first warrant was issued, he canceled a trip to neighboring Uganda, an ICC member state.)

UN Dispatch‘s Mark Leon Goldberg posits that this time, though, indicting a head of state wouldn’t really make any difference. “Qaddafi is already a man in hiding,” he writes, “so it is hard to see how this impending arrest warrant will have any near-term consequences for the situation on the ground in Libya.”

Ocampo, for his part, still won’t say if Qaddafi’s on the shitlist. “Don’t trust rumors,” he said simply when I asked him via email about the Al Arabiya report. But he would say that he thinks the repercussions of the soon-to-be-unveiled case will be huge. Tonight, I’m headed back to Europe to witness the preparations for further announcements about the case on next Monday.

The speed of the Libya case already makes it stand out from the court’s nine-year history. In the case of Sudan, the conflict went on for years, and then the Security Council deliberated for three months before referring the case to the ICC. In Libya? “Ten days of conflict, two days of discussion,” Ocampo likes to say. The next thing he said is the only thing I heard him repeat more frequently during our interview in New York last week: “The world is changing.”