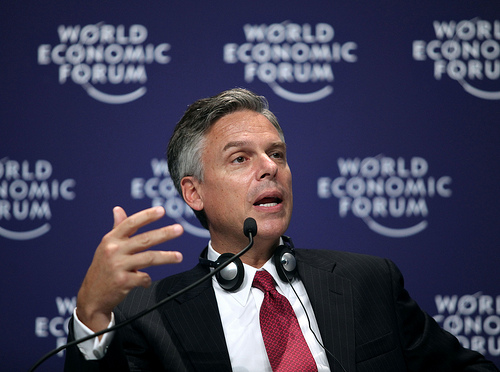 For the GOP’s 2012 presidential contenders, there’s one family whose approval the candidates will be fighting for more than any other: the Bush family. An endorsement by George H.W. Bush or Jeb or George W. will go a long way toward winning over Republican voters—and perhaps more importantly, deep-pocketed Republican donors—in the fiercely competitive primary season and ultimately locking up the GOP nomination.

It’s too early now to say who’s winning over the Bushes. George H.W. has agreed to meet with several presidential hopefuls, including Tim Pawlenty, who dropped in at Bush the senior’s office in Houston. But Time‘s Mark Halperin sees Jon Huntsman, Obama’s former ambassador to China, as a likely candidate to win over “BushWorld.” That observation looks especially true in light of Indiana governor and Bush favorite Mitch Daniels’ exit from the race:

The members of BushWorld (the family’s political and policy advisers, its bundlers—and 41, 43, and would-be 45 themselves) still don’t have a candidates in the Republicans’ 2012 presidential race. These are not a group of disinterested observers. Some are with Mitt Romney. Many are pressing Mitch Daniels to run. But most of them are searching for an answer to the question “Who can be nominated and beat Barack Obama?”

If Daniels doesn’t run (and even if he does…), Huntsman might end up being the consensus BushWorld candidate. Within the Republican Party, that remains the largest source of nomination throw-weight out there. Huntsman is playing an aggressive inside game, mirroring his long weekend in New England with many public events. Over the next few weeks, he will go from coast-to-coast doing more prospecting for campaign cash. And BushWorld is watching closely. The semiotics and symbolism of giving Huntsman a Kennebunkport audience are not lost on the very sophisticated Bushes.